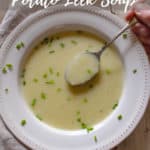 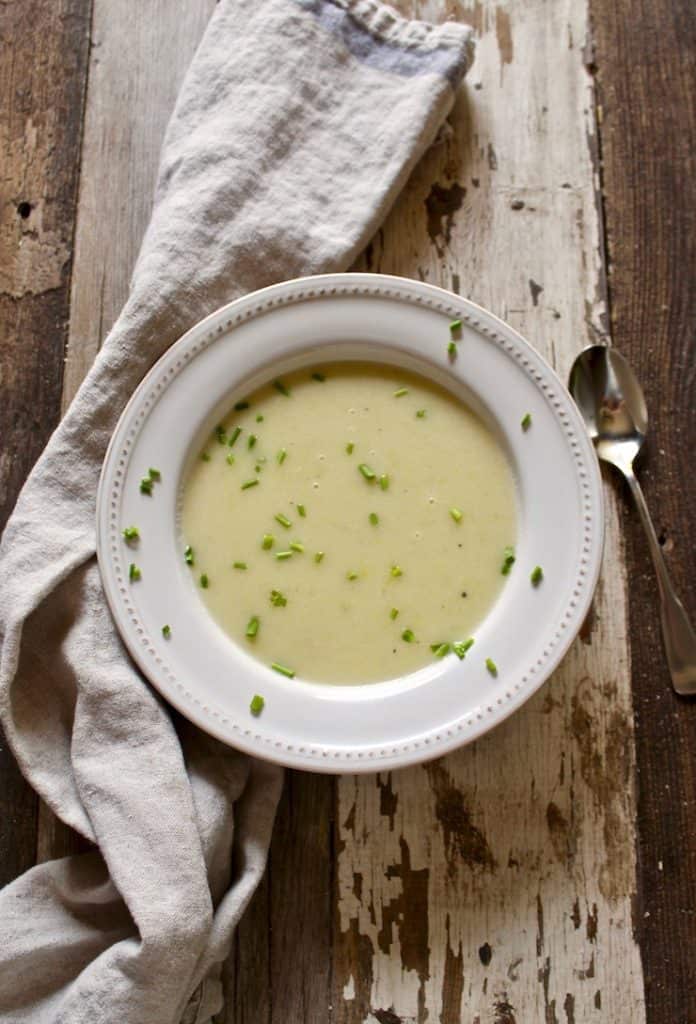 A few weeks ago, out to lunch with Meathead, I had a cup of potato leek soup that was so good in it’s simplicity.  I’ve never really thought about making it at home, but I’ve been craving it ever since.  So, out came my Julia Child’s cookbook for inspiration and to see how to make Potage Parmentier, and along with a little research, I made the most delicious Potato Leek Soup at home. It’s now part of my winter soup rotation, along with Sweet-and-Sour Beef Cabbage Soup and Turkey Noodle Soup. 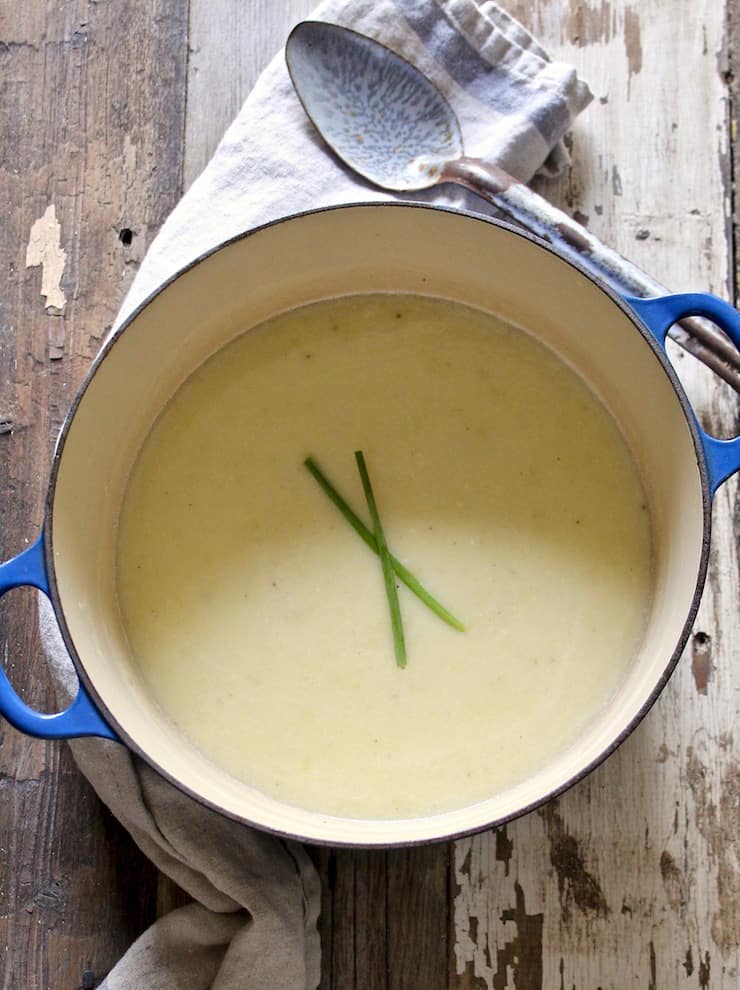 It’s potatoes and leeks, guys.  That’s pretty much it.  Some recipes say simmer in water, some say chicken stock.  Some add cream, some do not.  I chose to make mine with homemade chicken stock.  I almost always have some in my freezer and I really, really like it in soups ~ it just adds depth of flavor.  That said, many soups can be made with just water for the liquid, I get that and have done that.  But for this soup, the chicken stock adds needed something-something to the otherwise rather bland potatoes, producing a nice flavor profile with the leeks. 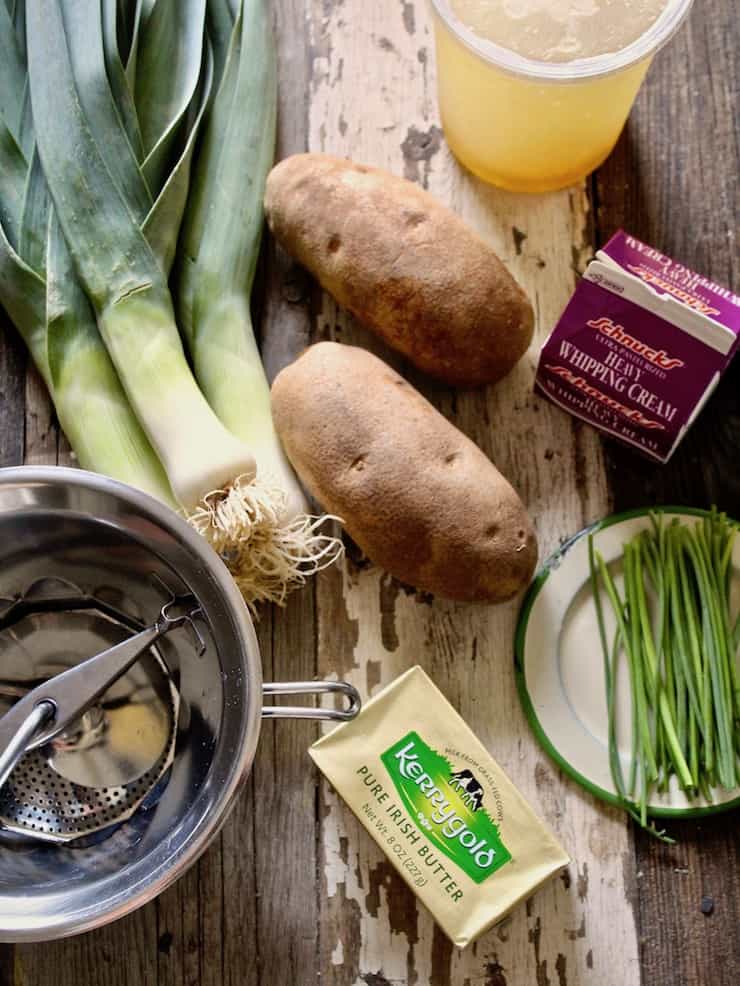 As far as cream, a little goes a long way in this soup.  I whisked in a few tablespoons to finish it off.  I really don’t think you need a lot of cream, but certainly some to gild the lily.  I’ve also read about adding some buttermilk to the finished soup for added brightness and tang, I may try next time and see if I like that.  But for now, just a little cream will suffice. 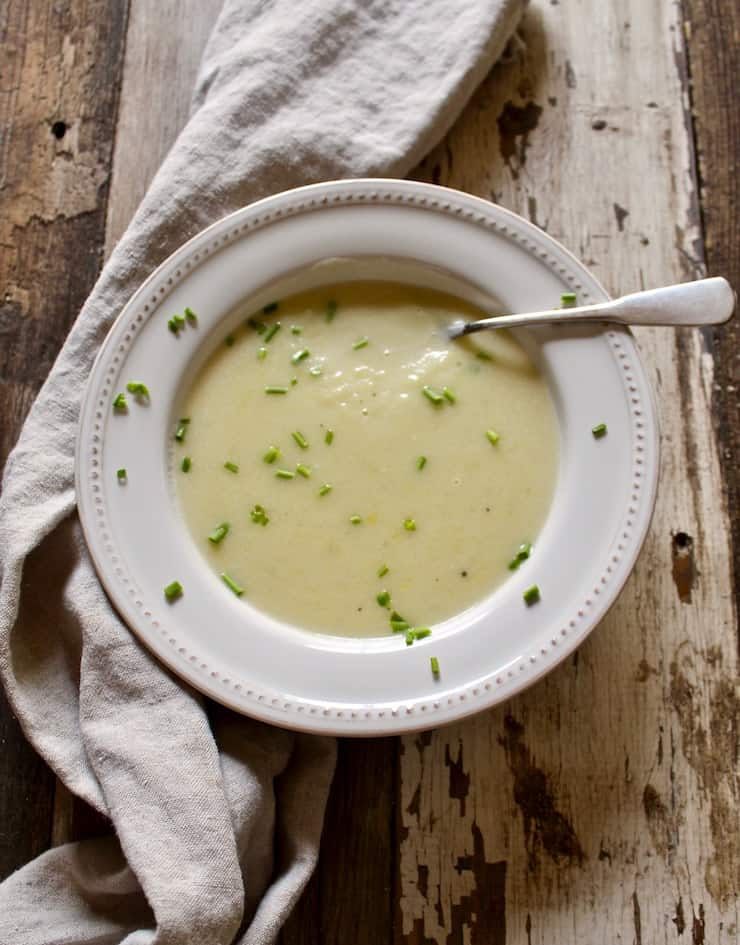 The key to this soup’s light texture is the use of a food mill, instead of a blender or food processor.  Running the potatoes through a food mill or ricer will keep the soup from having a gluey consistency that often happens when starchy vegetables are puréed in a processor, blender or in a mixer.  I love my food mill for cooked vegetables and making purées, and don’t forget to scrape the bottom of the disk when you’re done!

Serve this soup with a sprinkling of snipped chives on top and, for me, a little hot sauce, too.  This Potato Leek Soup is so good on a cold winter day ~ and so easy.  Try it, you’ll like it.  Promise.  Best ~ Kelly 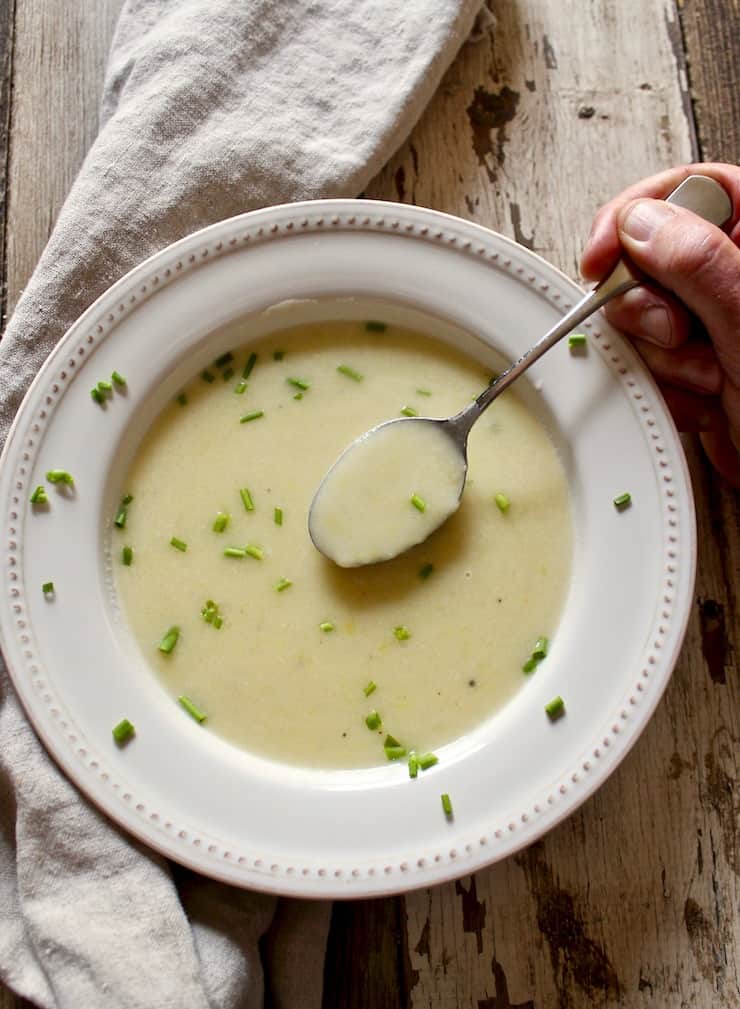 If you’ve tried this Potato Leek Soup or any other recipe on the blog, then don’t forget to rate the recipe and let me know how yours turned out in the comments below ~ I love hearing from you!  You can also FIND ME on FACEBOOK, TWITTER, INSTAGRAM and PINTEREST.  Never miss a post ~ sign up for The Hungry Bluebird Newsletter for a weekly email of new content.

*Inspired by and adapted from Julia Child and Serious Eats