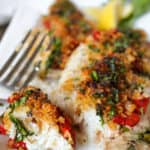 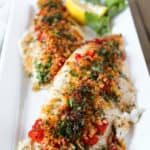 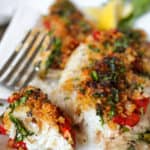 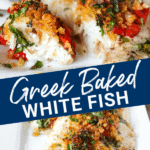 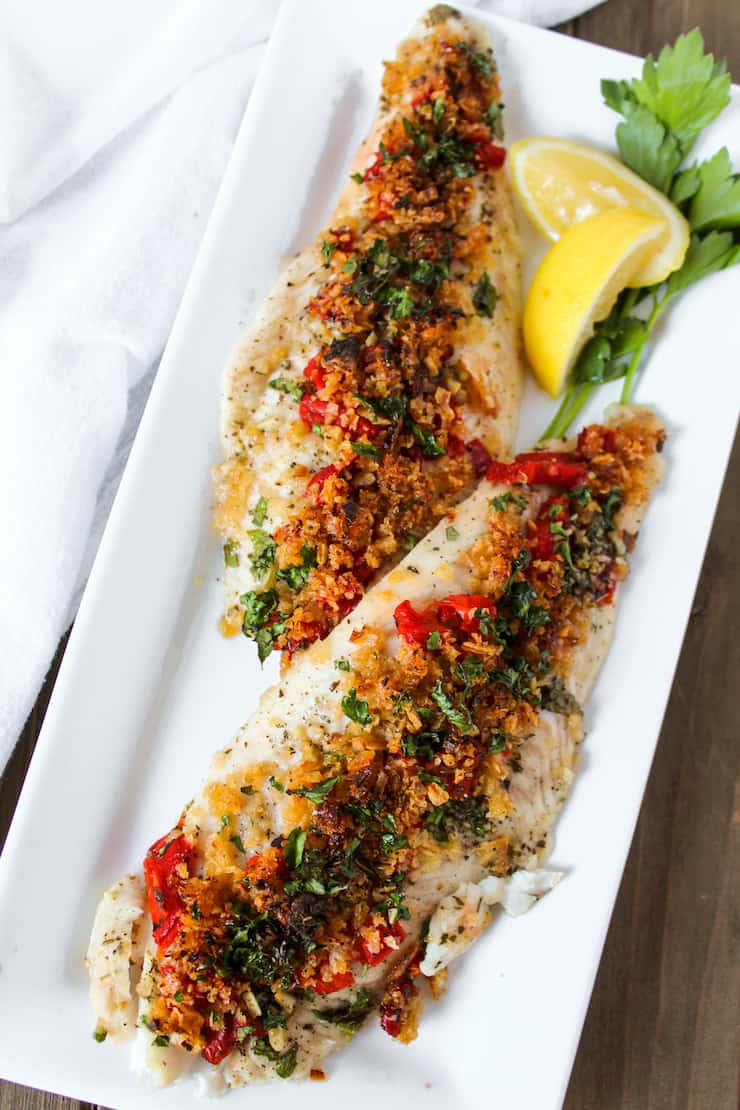 There are a few Greek churches here in St. Louis that have big festivals every year with tons of food and music and dancing and all sorts of fun stuff. Assumption Greek Orthodox Church also has a Friday luncheon year round.  I usually work Fridays so I never thought about it.

But this past spring, I had a few Fridays off and we got to go for lunch.  I'm crazy about this lunch.  The menu changes each week but always has a couple of entrees, a vegetable and rice, soup and gyros and salads and desserts, think baklava. 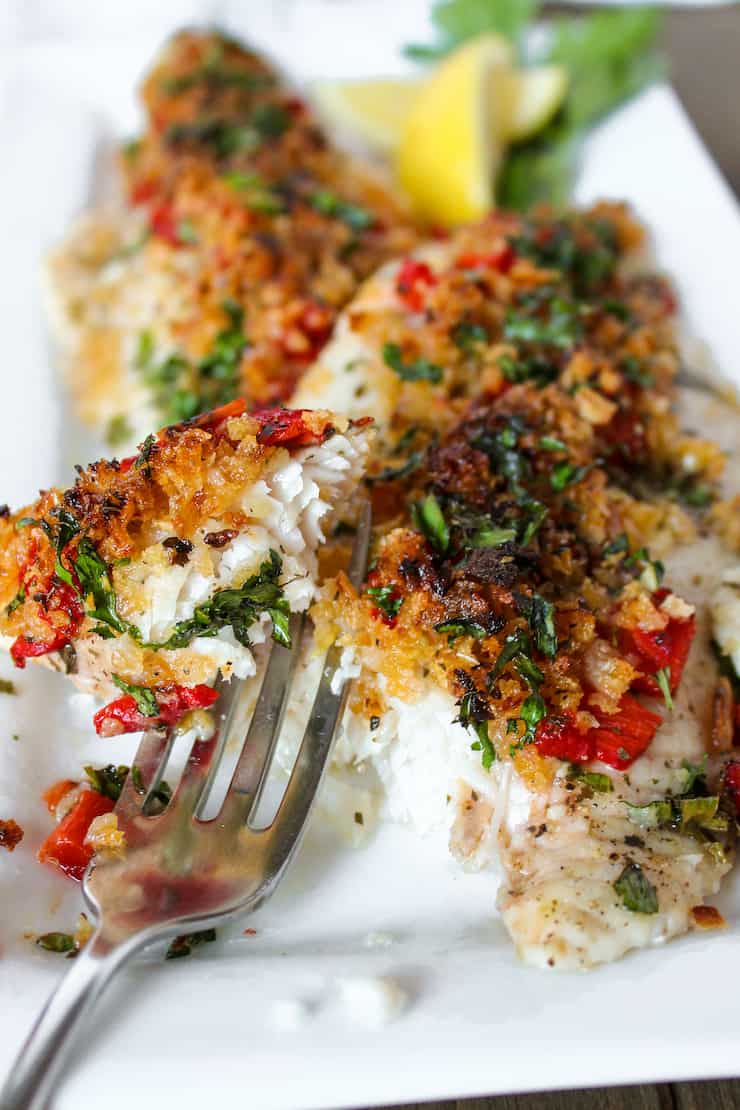 One dish they have every week is their rendition of Greek baked white fish.  Big sheet pans of fish come out of the kitchen and look absolutely amazing.  I have asked several times what kind of fish is this?  The volunteers working the lunch are just the sweetest.  The cashier said it's just white fish, don't know the name but it doesn't ever smell and is mild.

The gentleman serving me one Friday said in a thick Greek accent "It's just white fish...with vegetables and pimento...lemon and margarine".  He was so cute trying to explain how they make it to me.  My husband and daughter would listen to me rave about my fish while they dug into their pastitsio and honey chicken.  Picky Eater loves pastitsio and baklava, both of which I have made at home. 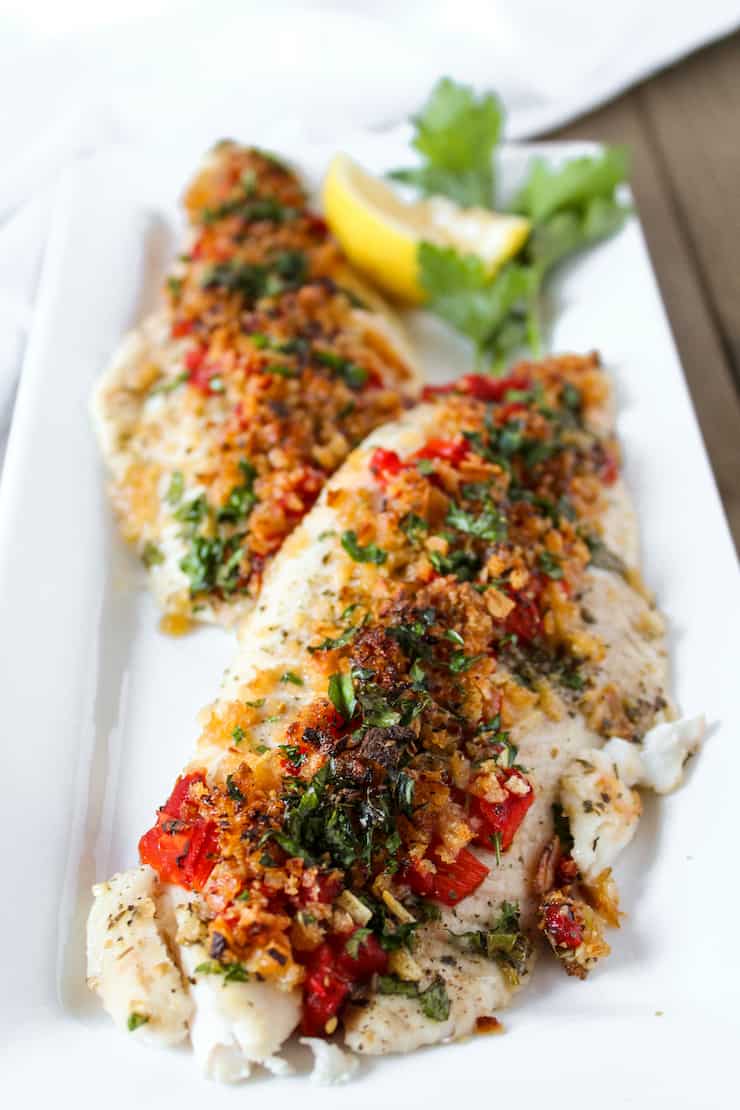 Guess what?  A couple of months ago the recipe was in the newspaper!  Yep, the column where people ask for their favorite recipe from an area restaurant. I was so excited, so much so that my family thought I was a little wacko about it.  And I was really surprised by one particular ingredient -- French's French Fried Onions.  The stuff I've only seen on green bean casserole but never tried.

And the white fish nobody could identify for me is swai. Apparently it is a Vietnamese catfish with a mild taste and flaky texture. Who knew?  It is inexpensive and my grocery stores carry it in the frozen seafood section.  I have seen it "fresh" in the seafood counter but you want it frozen, I'll explain why later. 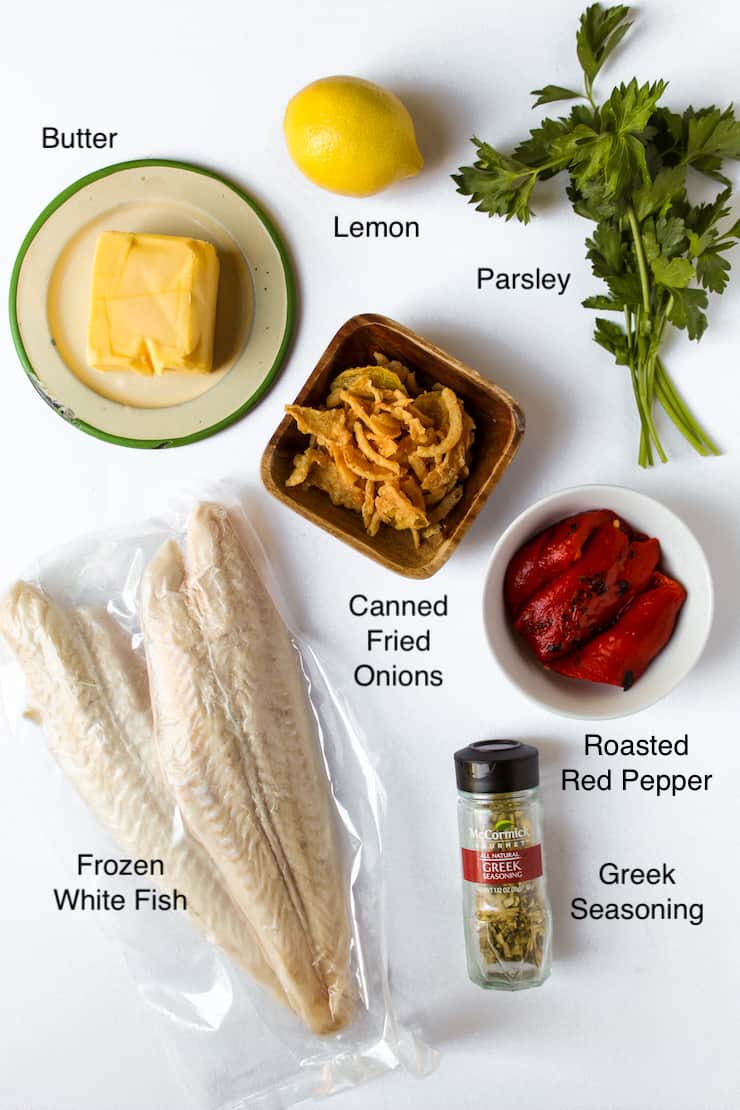 Well, I have been making this at home now almost every week.  It tastes just like Assumption's.  It is really, really good.  They say to use frozen swai because the lemon and butter (not margarine) hardens on the frozen fish and melts into the fish as it bakes.

They also recommend using European-style butter like Plugra, Kerrygold or Lurpak.  The recipe is per piece of fish so just make as many as you want.  I often make two, sometimes three, Picky Eater is just starting to warm up to it.  At least it's not salmon she says. 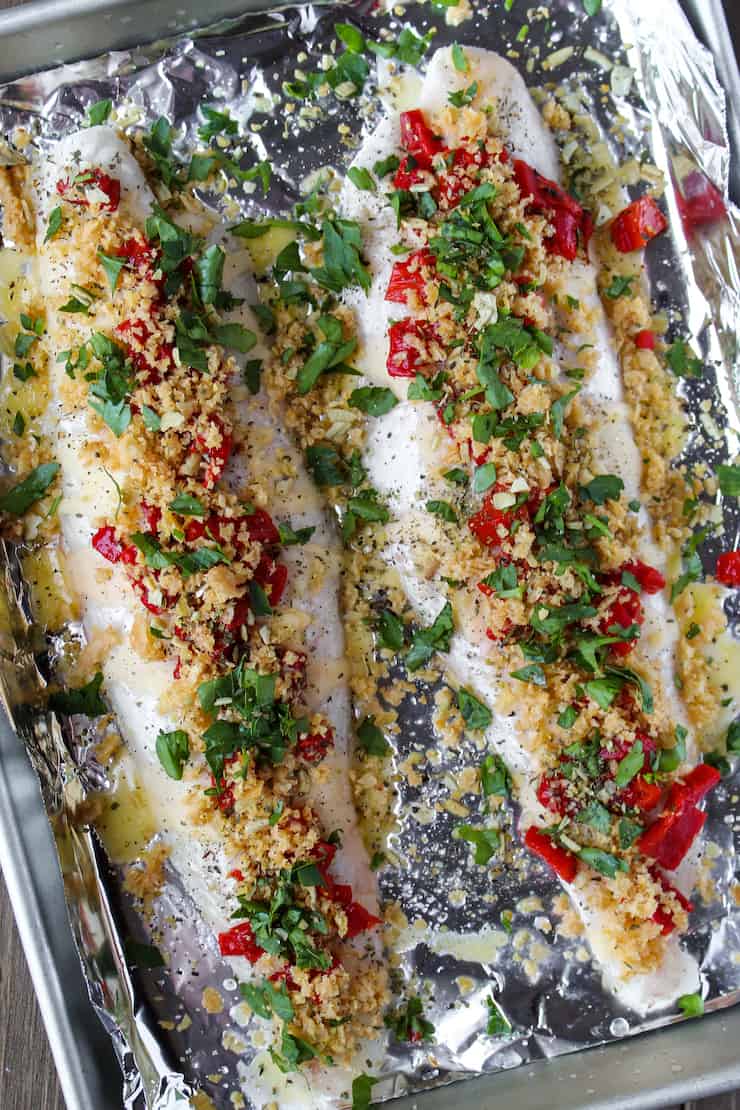 I'm not sure if this is considered Greek-style but it is to me.  Thanks Assumption for sharing how you make your baked white fish.  Try it, it's really good. Better yet, head over to their Friday lunch some time.  Best, Kelly🍴🐦 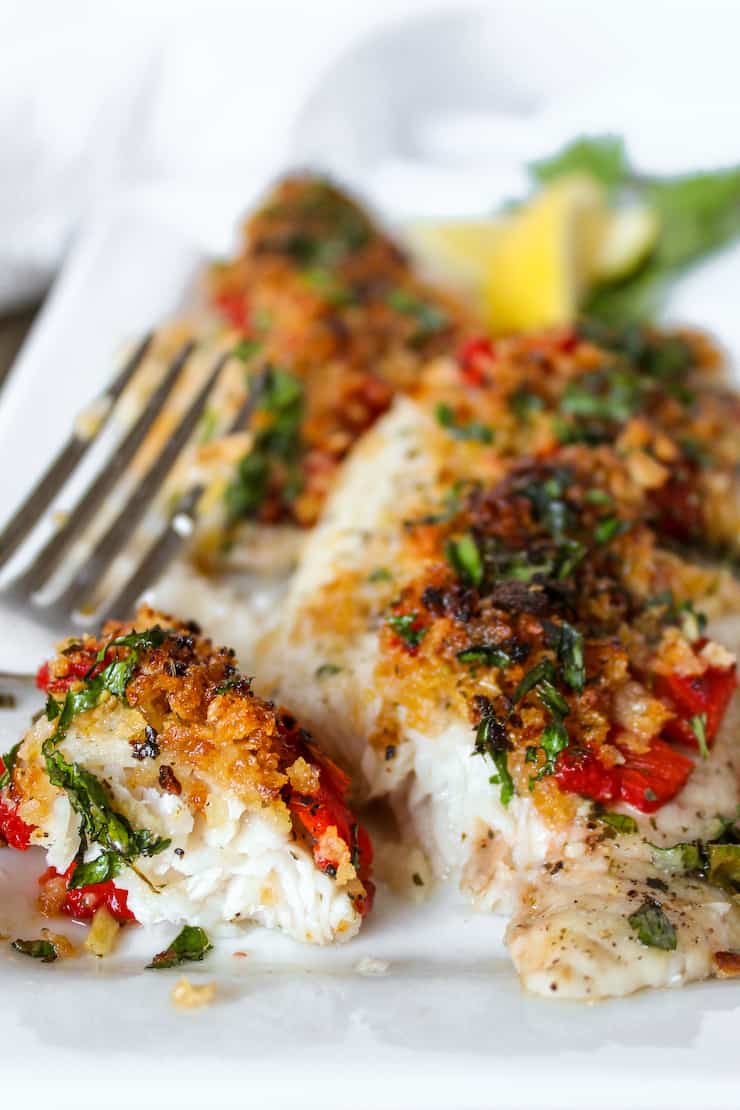 If you share my love for Greek food, then you have to try my recipes for Pastitsio and Baklava, both given to me from my Greek friend who taught me how to make her authentic family dishes.  They are superb! 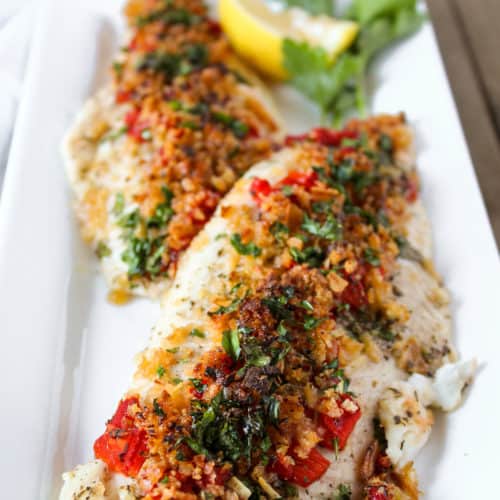 Adapted from newspaper, recipe from Assumption Greek Orthodox Church. I recommend serving over rice to soak up all the delicious sauce.

oh my gosh....this was delicious!!! I didn't have greek seasoning, so I used garlic powder. not as good I'm sure, and greek seasoning is on my grocery list! I used a bit more of the topping mixture than the recipe called for and the excess soaked up the excess butter/lemon drippings and made a sort of thick sauce. this will def be my go-to for white fish for now on! tonight I try your chicken recipe using the remainder of my fried onions! yum!!!!!!!!

Hi Kimberly. Thanks so much for letting me know how this recipe worked out for you. Sounds delicious!!

Delicious! I made this scrumptious fish exactly as directed. I used frozen Icelandic cod. Thanks for your persistence in hunting down this wonderful recipe! Winner, winner Greek baked white fish dinner!

Definitely going to try this recipe this week, but with cod, sounds great! You may want to google “is it safe to eat Swai fish” before choosing it over cod.

can you substitute the garlic seasoning for fresh garlic?

Yes, that's what I use, or Greek seasoning.

Super Easy & Super Yummy. The whole family enjoyed it. I used homemade Greek seasoning & had already defrosted the fish so it only took 20 minutes in the oven.