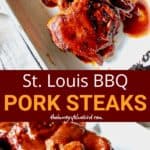 St. Louis BBQ pork steaks, a regional specialty ~ doused in BBQ sauce and slow cooked on the grill until tender. 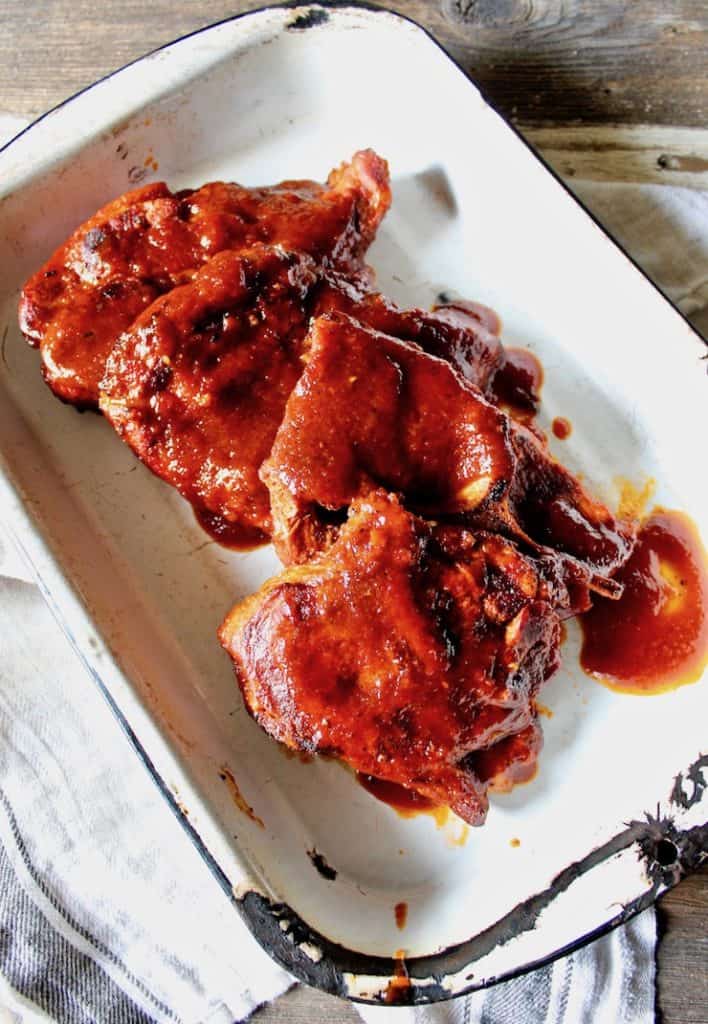 I've moved around quite a bit since college, staying mostly in the Midwest.  Always takes some getting used to new digs, and there's always new food to try that's unique to the city or region.  Fifteen years ago, we moved to St. Louis where Provel cheese, toasted ravioli and paper-thin crust pizza are mainstays.  But guys, pork steaks are King and rule the land.  I had never seen or heard of them before we moved to St. Louis. 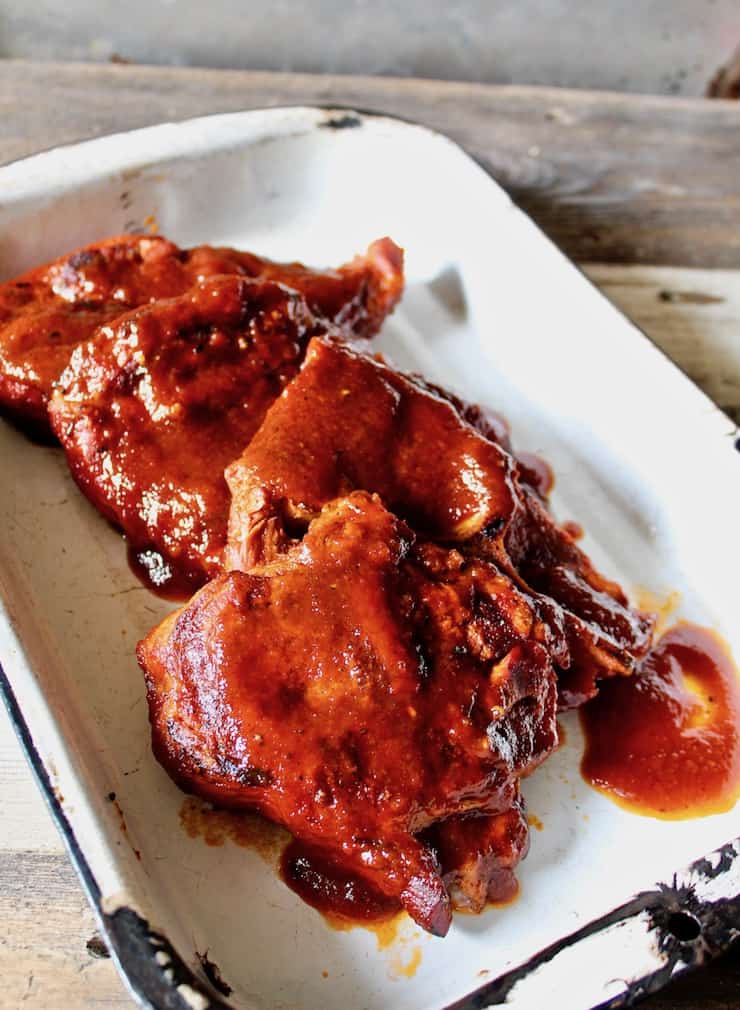 What is this St. Louis pork steak I speak of?  It's a blade steak cut from a pork butt.  The kind of pork cut you slow-cook for hours.  Pork steaks are cheap and ALWAYS on sale in the grocery stores here in St. Louis.  And, yes, these steaks are tough ~ you cannot just throw them on the grill, they will be inedible.  Trust me, I learned the hard way the first time I made them. 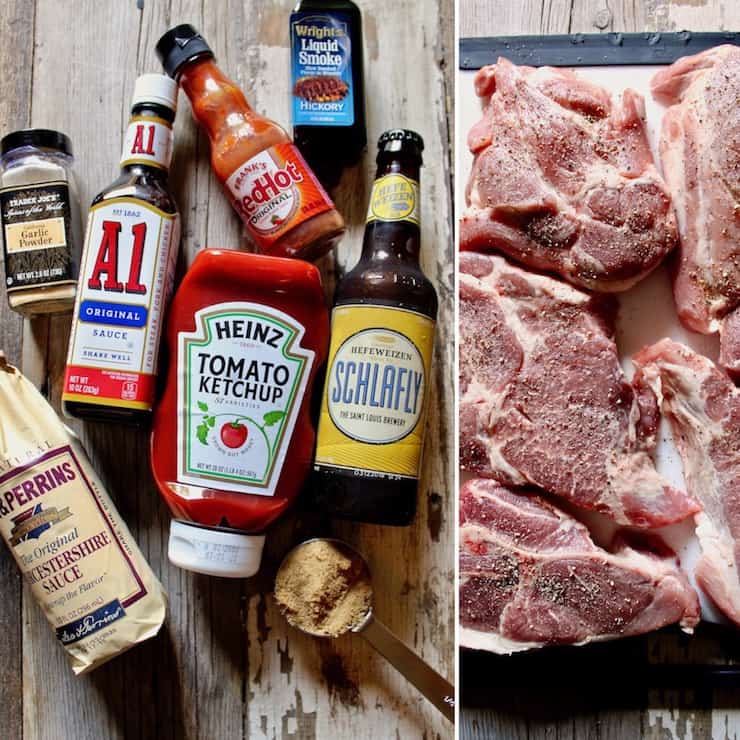 A properly cooked St. Louis pork steak is a little chewy but tender, and doused in BBQ sauce, usually something local, like Maull's. My first attempt was awful and I honestly didn't understand the appeal of a pork steak.  But then a neighbor told me to cook them in the oven in barbecue sauce until tender, then finish off on the grill.  So I tried it that way, so much better. 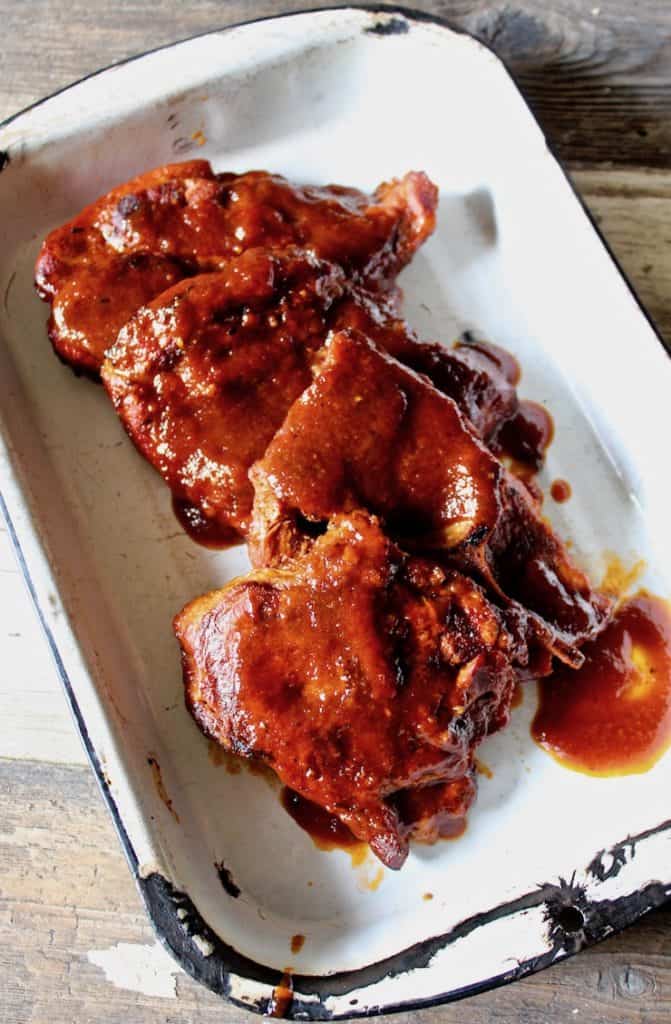 I have several St. Louis-style pork steak recipes clipped out from newspapers and magazines.  My favorite is the one from Cook's Country magazine that was published in our local newspaper.  It's all done on the grill and it's easy.  Make a tasty BBQ sauce with beer, brown the pork steaks, pour the sauce over the steaks in a big disposable pan, cover and cook for about an hour and a half.  Pretty darn easy and delicious! 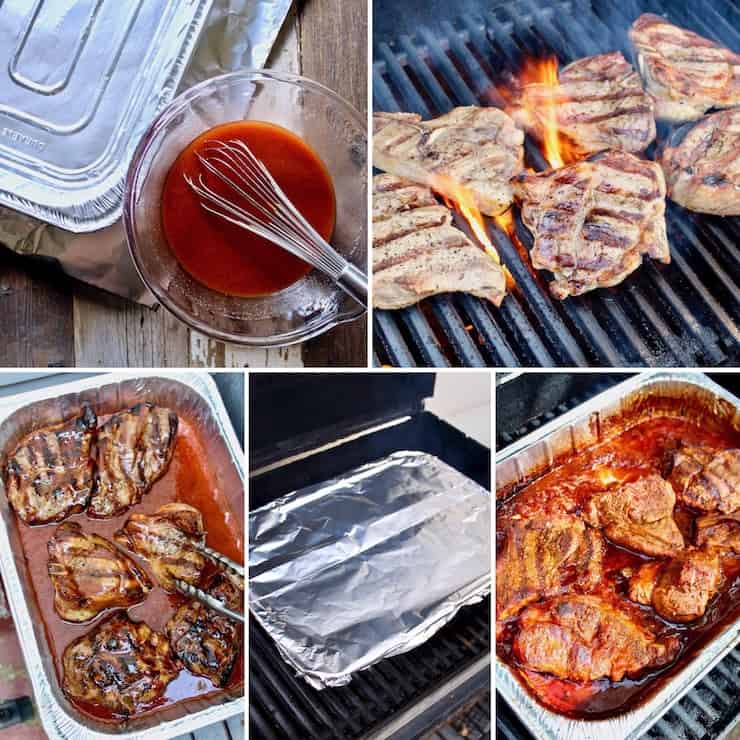 Nope, I never saw a pork steak in Chicago, Minnesota, Iowa or Ohio.  But BBQ pork steaks are practically on every street corner pop-up BBQ stand in St. Louis during the summer, and on many a backyard grill for the summer holidays.  It's just what we do in St. Louis ~ Kelly

You might also want to try my St. Louis-style BBQ Ribs.

If you try these BBQ Pork Steaks or any other recipe on the blog, then don't forget to rate the recipe and let me know how yours turned out in the comments below ~ I love hearing from you!  You can also FOLLOW ME on FACEBOOK, TWITTER, INSTAGRAM and PINTEREST to see more of what I'm cooking in my kitchen and recipes. 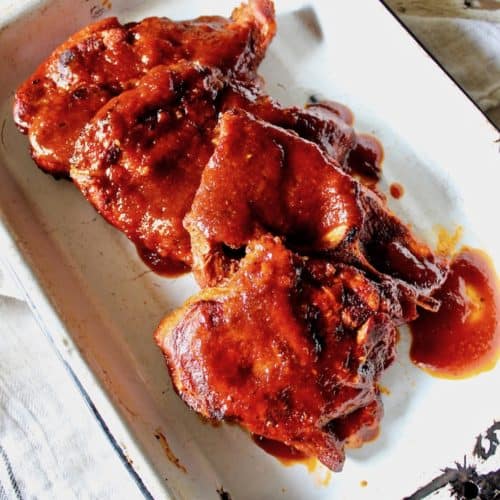 Hi, I'm from St. Louis and grew up on Porksteaks. I moved out of state for many years then moved back to mid Missouri a few years ago. So I started getting them again but couldn't remember how to grill them right. I have o say though 6-7 mins a side is way too long. I just burned mine to a crisp. I'll try again soon without such high flame. But I'm still going to eat them because of the sauce recipe. I hope it's good.

The only way to make pork steaks! SO GOOD!! From St.Louis & no you can't find them in Texas. I talked the butcher into cutting up a bone in pork butt. Cut about 1.25 thick.Love surprising friends and family here in Texas!

I'm from St. Louis area and have heard that a pork steak can't be found outside of this area. Seems strange, but then I come from a pork family--my dad and granddad sold hogs for a living at National Stock Yards in E. St. Louis Illinois. Anyway, this recipe sounds good (and easy) and am going to give it a try for my husband tomorrow for father's day.

@Linda, I am also from the STL area but now live in Phoenix. I haven’t had a pork steak in almost 20 years! I had to reply to your comment, my grandfather also worked/retired from the E. St. Louis National Stock Yards.

I never heard of them until I moved to St. Louis. They are everywhere and ALWAYS available in the grocery stores!

These pork steaks were really good. A really easy, flavorful, and cheap meal. Thanks for sharing your recipe. I did add a bit of chili powder to the sauce.

Thanks for letting me know, nice addition with the chili powder.

These pork steaks were really good. A really easy, flavorful, and cheap meal. Thanks for sharing your recipe.