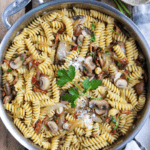 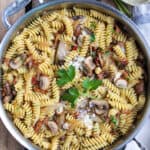 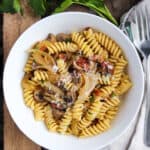 Quick and easy weeknight pasta with bacon, onions and mushrooms, all in one pan and on the table in 30 minutes. 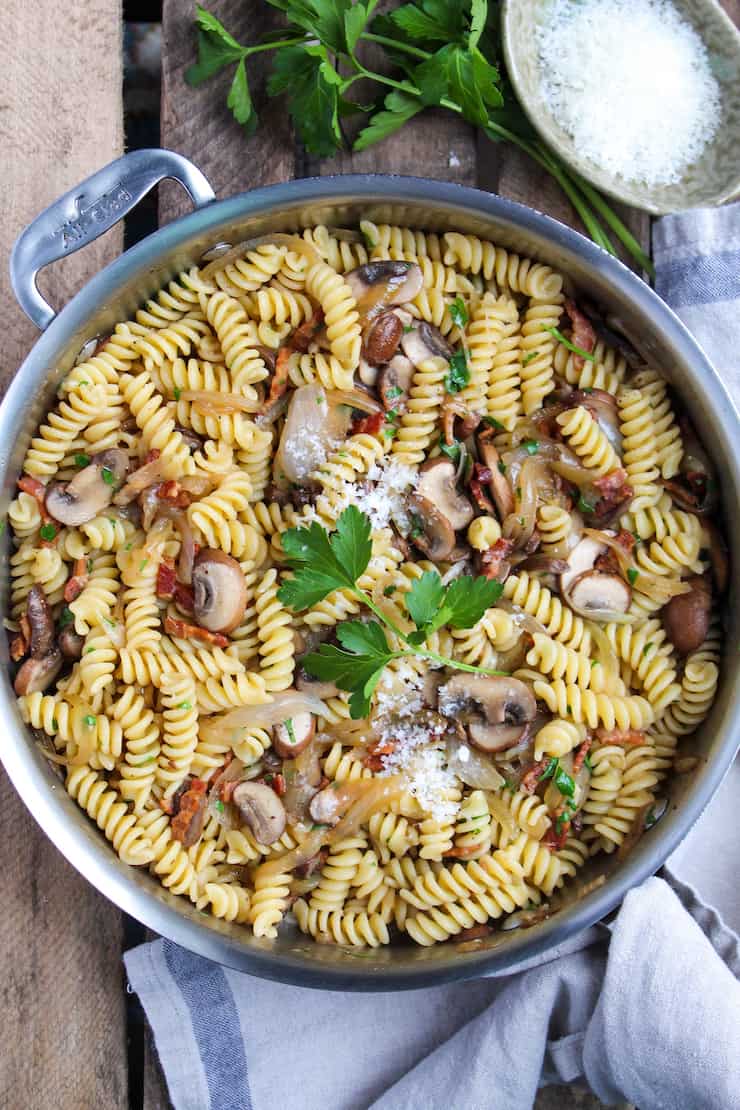 I remember clipping this recipe out of Martha Stewart Living and tossing it in my recipe drawer.  Rummaging through my drawer a few months later, it caught my eye and I thought it’d be a good weeknight dinner.

Little did I know it would become one of Picky Eater’s favorites ~ Pasta with Bacon, Onions and Mushrooms.  I was kind of surprised by that, I knew she’d like the bacon but didn’t think the mushrooms and onions would go over very well.  I was wrong, she loves this pasta. 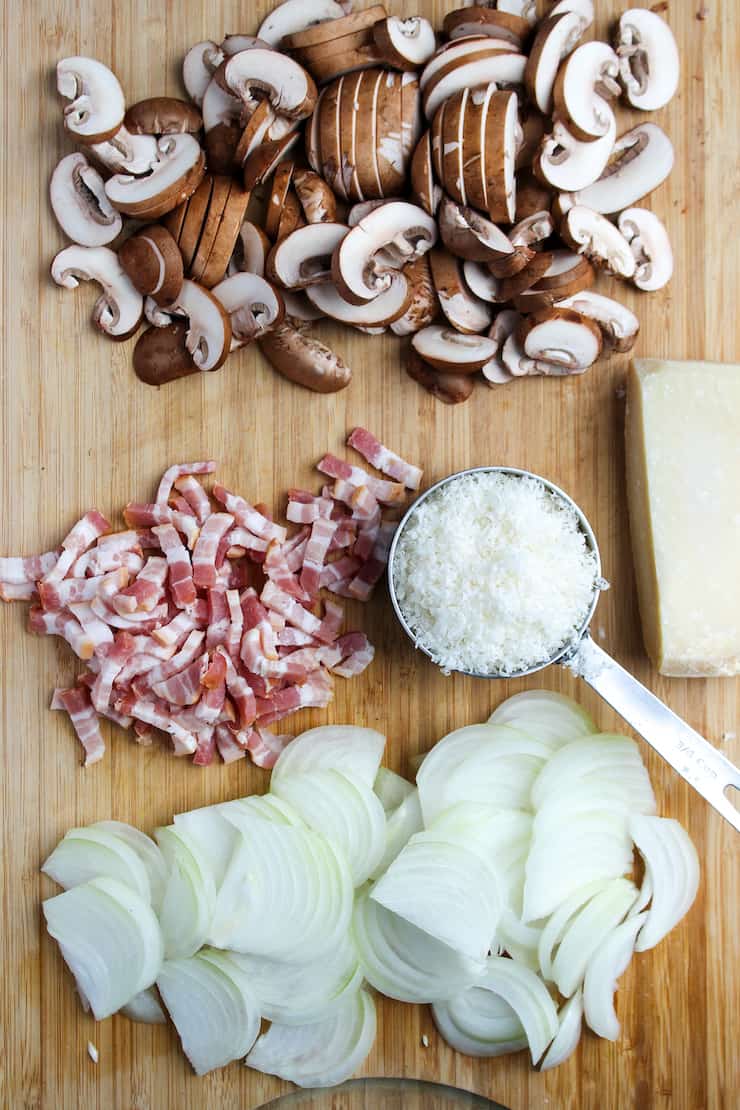 It is so simple and comes together in one pan (well practically, you have to boil the pasta separately).  High five to that!  Cook up some bacon, add onions and mushrooms, then toss in the pasta and some good Parmesan.  Adding pasta cooking water gives it a nice, silky sauce ~ creamy but with no cream.

The browned bits in the pan add even more rich flavor to this simple dish.  Best part?  On the table in half an hour.  Another high five!  Picky Eater also loves, and recently made herself, this quick and simple baked Penne with Prosciutto and Parmesan Cream. 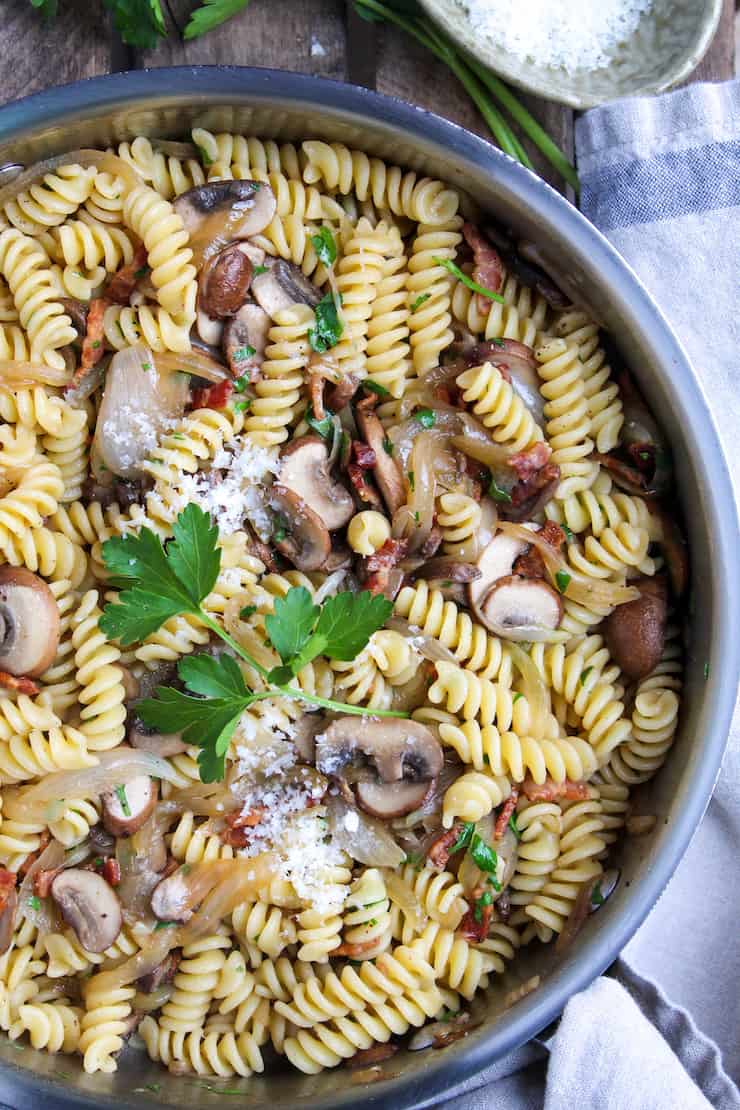 Picky Eater is in her first apartment this year at college, yes, off campus.  The first thing she asked me for was this recipe for Pasta with Bacon, Onions and Mushrooms ~ I can’t believe I never thought to put it on the blog until now.  You really can’t go wrong with bacon and onion, and combined with cremini mushrooms and pasta, you have the makings of a perfect, quick weeknight dinner.  Enjoy ~ Kelly🍴🐦 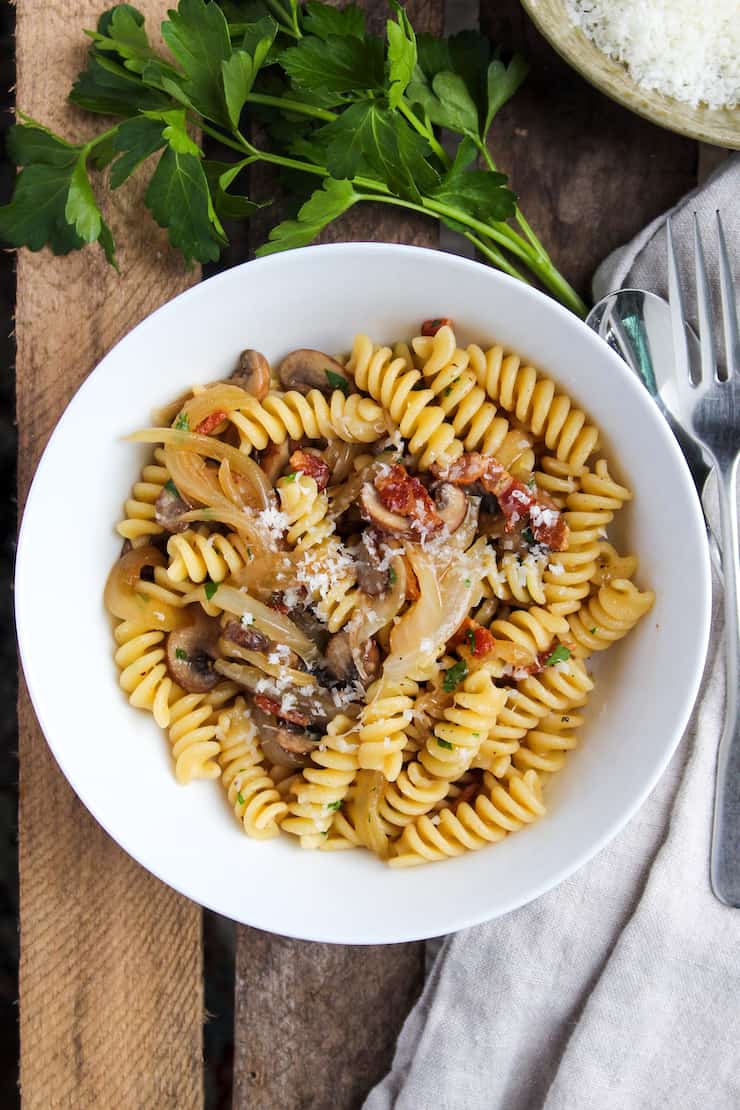 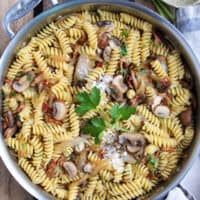 Pasta with Bacon, Onions and Mushrooms

Keyword: pasta with bacon onion mushrooms, bacon and mushroom pasta, without cream, bacon pasta
Did you make this recipe? Please comment, rate it and share! And mention me on Instagram @thehungrybluebird or tag #thehungrybluebird so I can see!
406 shares

I added peas and corn but left the cheese out. was perfect. I also added a couple of teaspoons of cornflour to the frypan and stirred and cooked it out before adding the pasta water.