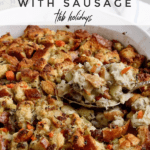 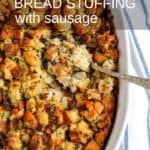 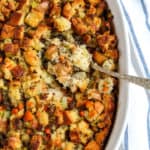 Old-fashioned Bread Stuffing with Sausage, just like my dad’s ~ almost.  Easy, made from scratch bread stuffing with sausage, cooked outside the turkey in a casserole.  The best side on the holiday table! 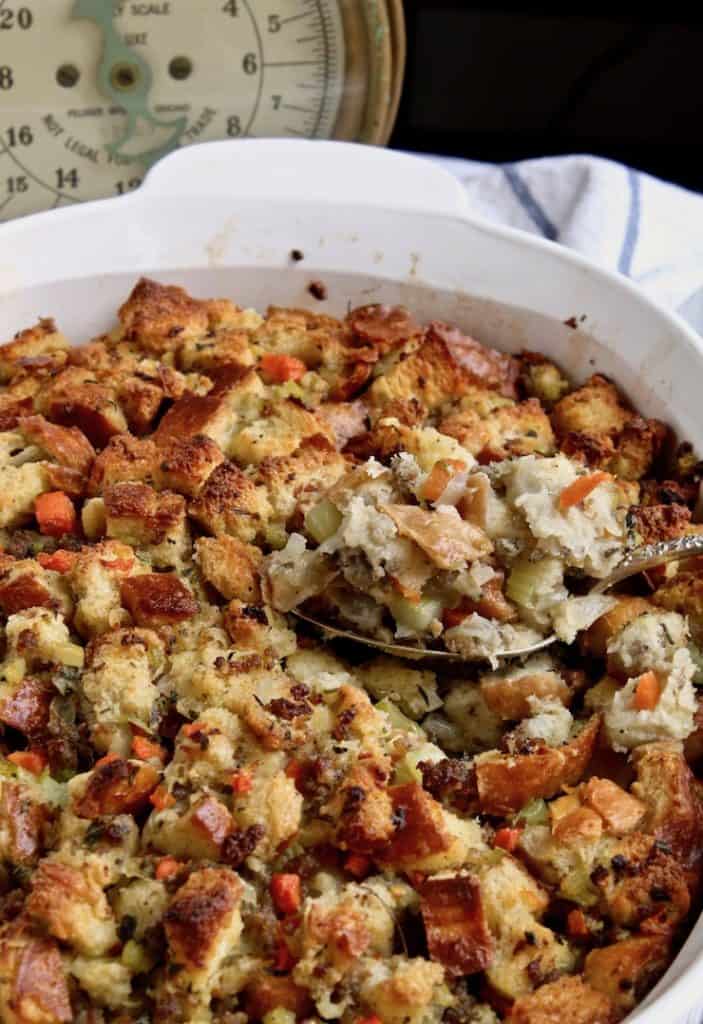 Holidays and food always conjure up memories of my dad.  He was such a great cook, I’d say old world through and through, he rarely used a written recipe.  But as my dad got older, he was always watching PBS cooking shows and then the new Food Network, and he subscribed to many cooking magazines.  He was always clipping recipes and jotting something down he saw on a cooking show, just continually experimenting in the kitchen.

But the holidays, at least Thanksgiving, he didn’t mess around with “new” stuff, at least not very often.  And his stuffing was always good old-fashioned bread stuffing. 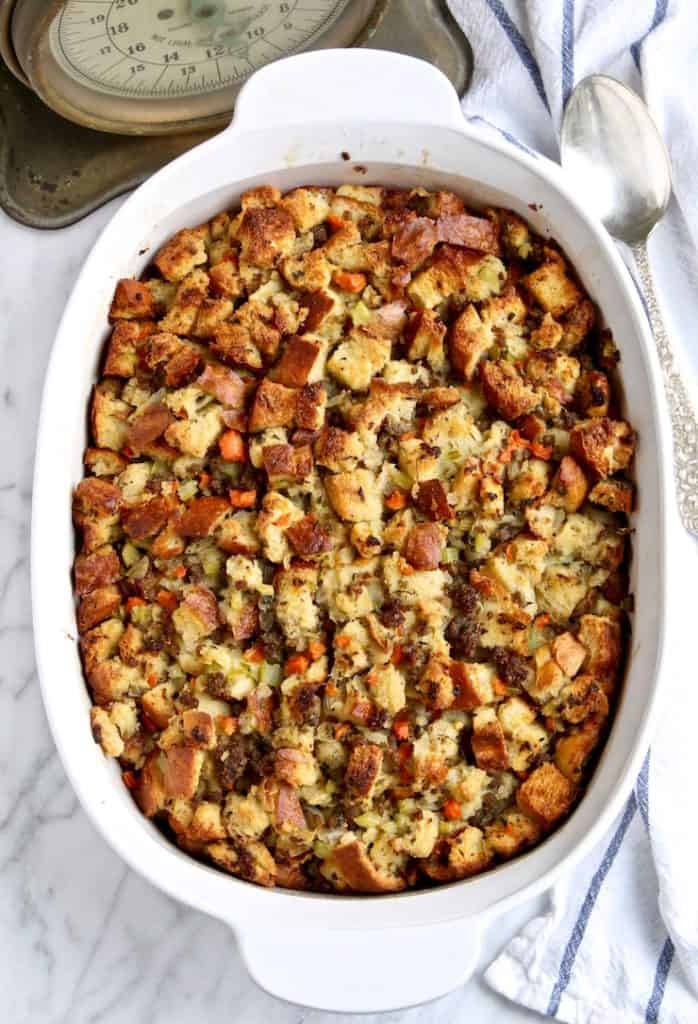 First thing on Thanksgiving morning, I awoke to the best smell coming out of the kitchen.  No, not the turkey in the oven, the stuffing my dad was making on the stove.  He always stuffed the bird, no big pans of dressing on the side, although there usually was a small casserole of some stuffing that didn’t fit in the bird.

No recipe, just his skillet of celery, onion, carrots, butter and dried herbs.  In my eyes, dad’s stuffing was the best, and any variation ~ like the year he put oysters in it! ~ was always a bit disappointing.  Stick with the original, dad.  And the best part?  The crispy browned pieces poking out of the bird when he pulled it out of the oven. 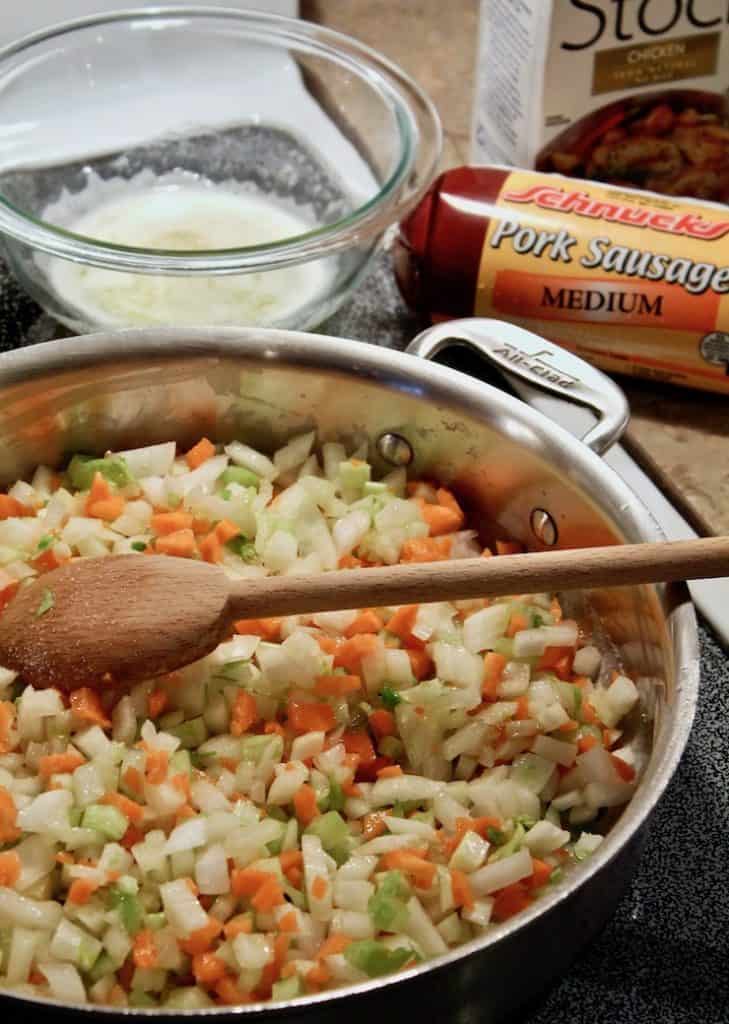 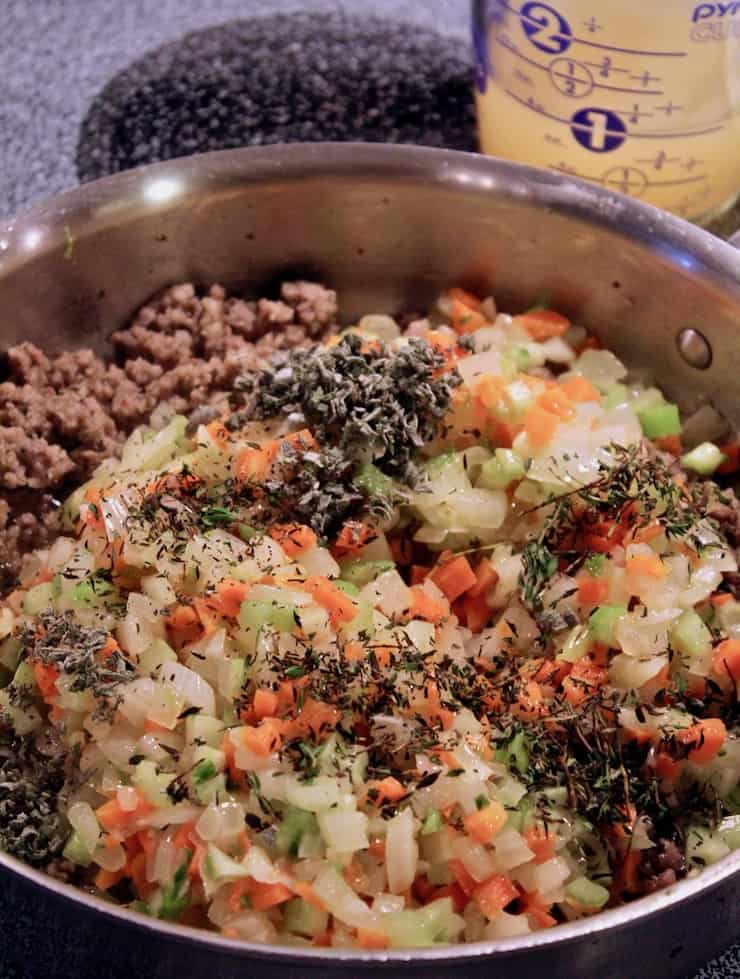 Several years ago, I went from hosting an occasional Thanksgiving to having Thanksgiving at our house every year now.  I wanted to make stuffing like my dad, and searched for and read many versions ~ lots of recipes out there ~ before I settled on a recipe that sounded just like my dad’s with a little extra something to make it my own.

A traditional bread stuffing with sausage.  And technically, this would be considered dressing as I do it on the side, in a big casserole.  But that sounds weird, it will always be stuffing to me. 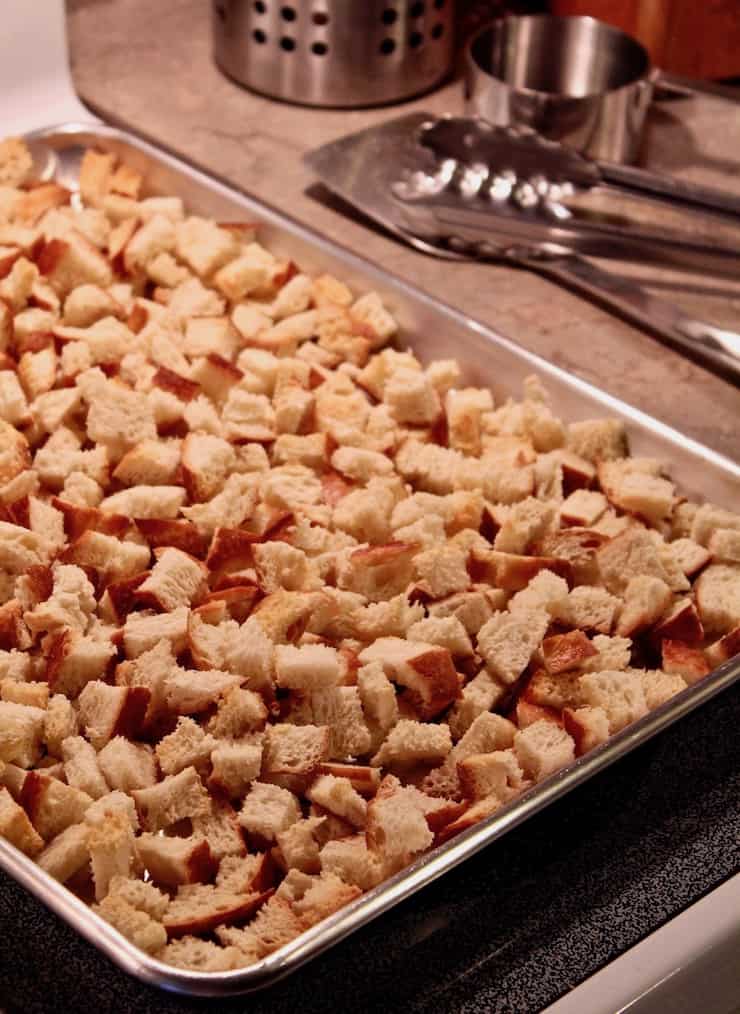 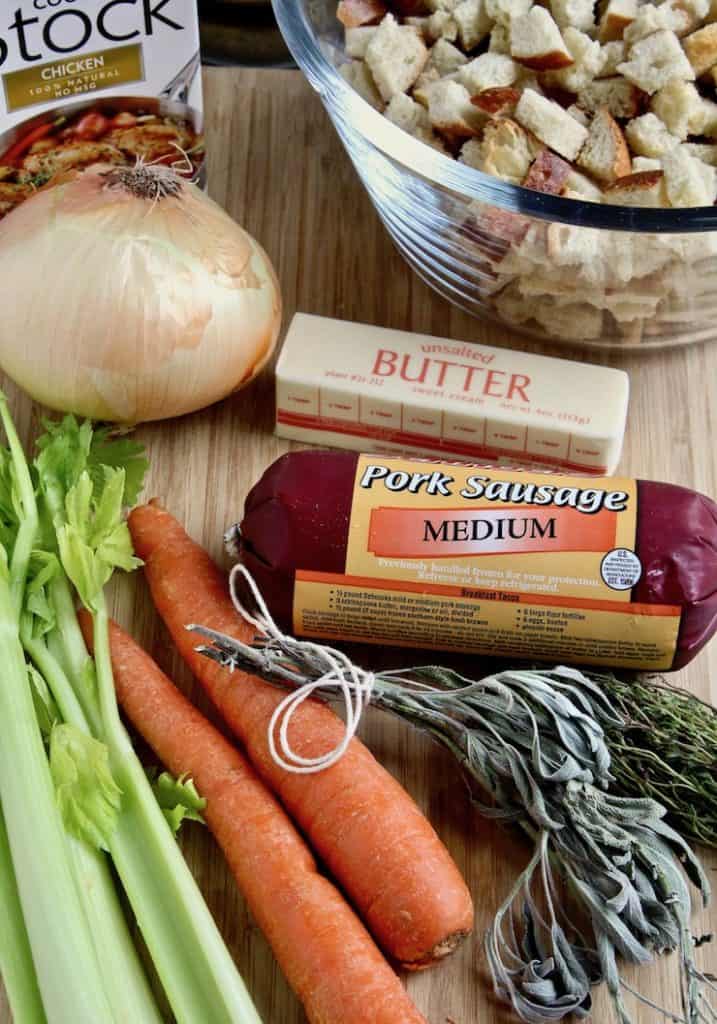 Shout out to my dad here ~ he made the best gravy, hands down, the best.  He was known for his gravies and I have not been able to master that, yet. I’m coming close, but my gravy is never as good as my dad’s.  No recipe, just my memories of watching him make it so many times. 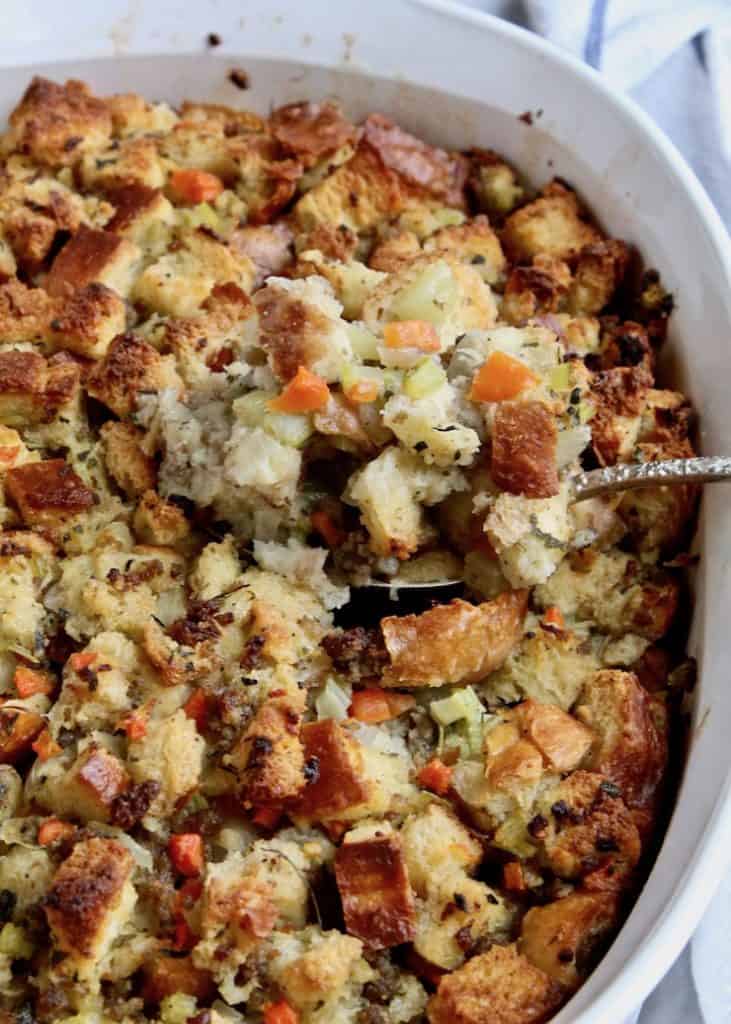 I, too, make turkey stock each Thanksgiving for the stuffing and gravy.  For this stuffing, you can use chicken stock or broth, preferably homemade.  I didn’t have enough on hand in my freezer when I made this yesterday for this post, so I used store-bought chicken stock and it was just fine.  Just for the record, turkey stock is the best though.

We all have our traditions and dishes for the holidays.  My favorite side is this Old-Fashioned Bread Stuffing with Sausage, inspired by my dad.  My girls really like it, too.  Each year now, they ask me “Is this the stuffing you make with the sausage”?  Yes, it is ~ and it always will be.  Miss you Papa ~ you would like it, too.  Happy Thanksgiving ~ Kelly 🦃 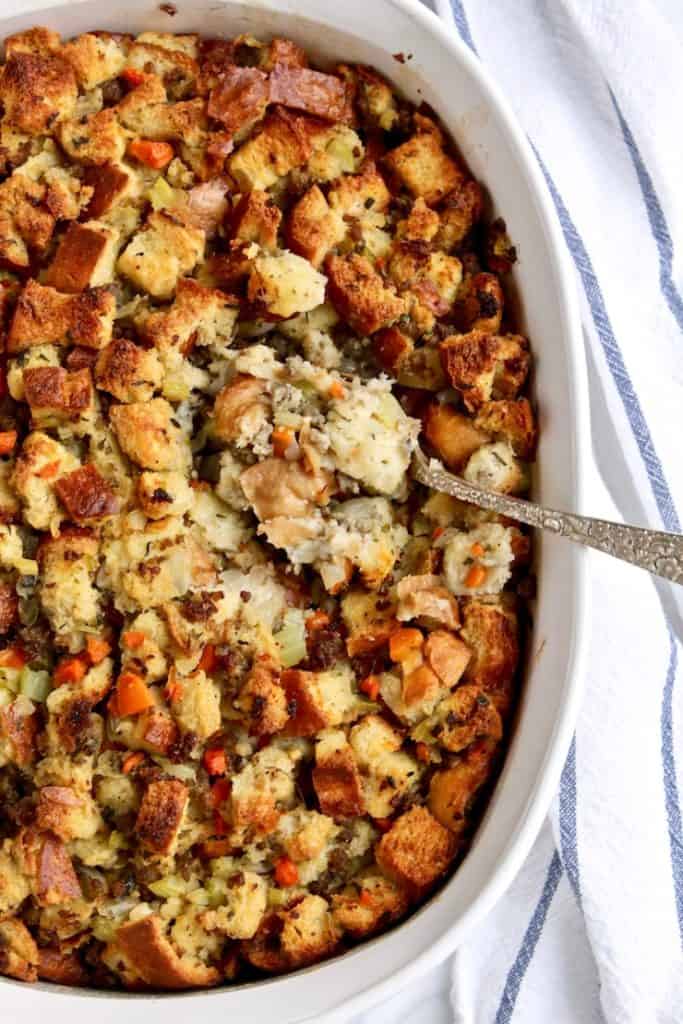 Other favorite holiday side dishes to try: 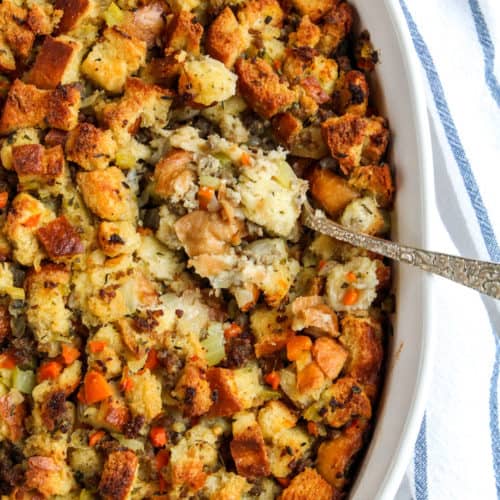