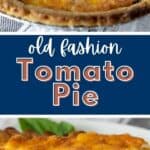 Southern tomato pie is perfect summer comfort food, with garden fresh, peak season tomatoes and basil topped with a creamy cheese mixture and baked until golden brown in a flaky pie crust shell. Delightful with a green salad for a light dinner or serve as a side at your next summer gathering! 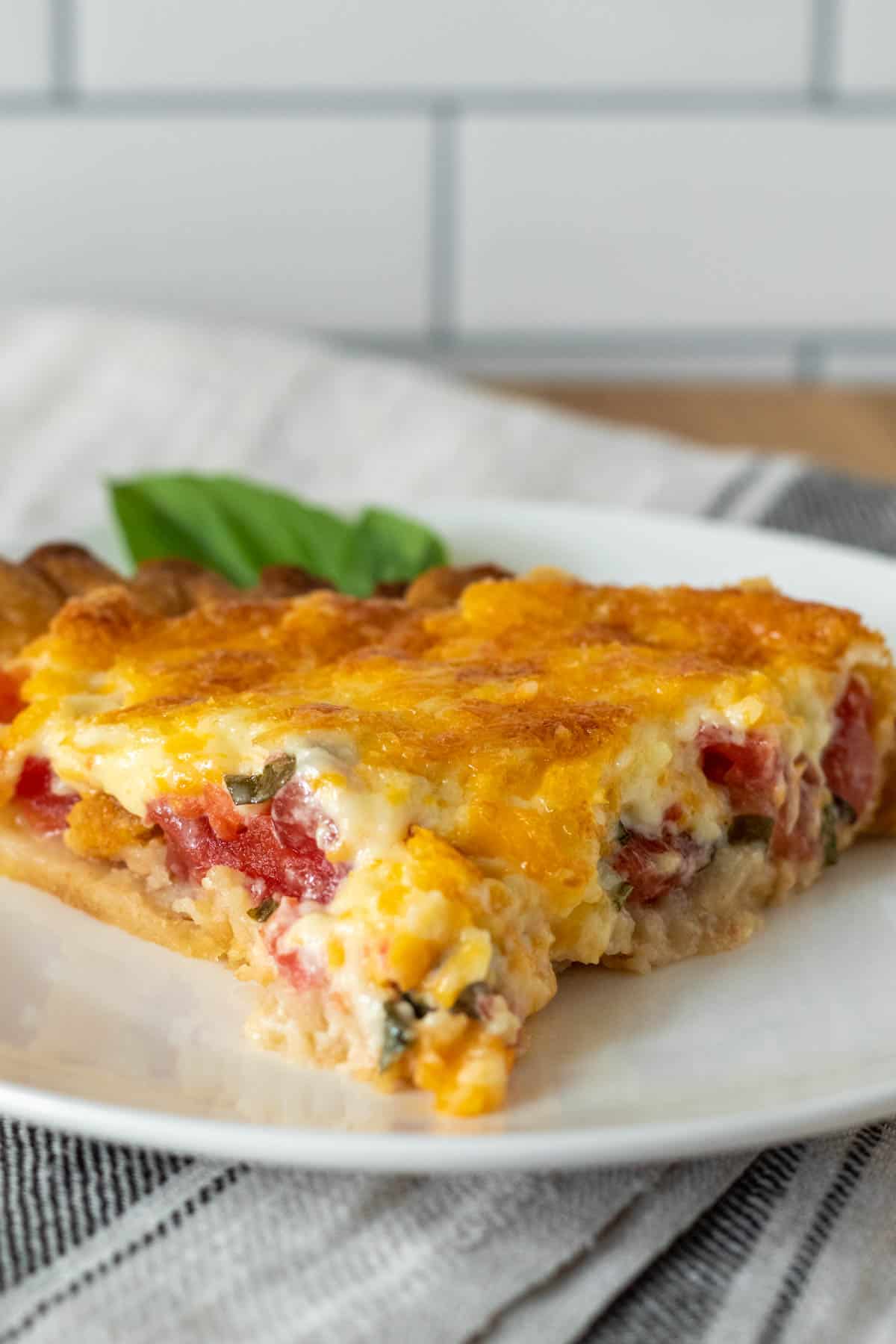 When my mom gave me her friend's handwritten tomato pie recipe from the early 90's, I thought this is weird. But she said my dad made it often and everyone always asked him for the recipe. So I decided to give it a try. My dad rarely made a culinary flop.

This is a classic southern food dish, sometimes called Kentucky Pie or Alabama Pie or simply tomato pie. Lynn, who passed this recipe on to my dad, hailed from Chicago so not sure where she came up with it. I just know it screams summer goodness, perfect for those late summer ripe tomatoes and fresh garden basil.

What is Tomato Pie?

It's a savory pie made with chopped fresh tomatoes and basil, topped with a creamy mayonnaise-cheese mixture, then baked in a flaky pie crust shell until golden brown. Slice and serve it like a pie, warm or room temperature, as the main dish or side.

There are variations with added onion or bacon and different cheese choices, or layered sliced tomatoes instead of chopped, but it's essentially the same concept. A savory way to use summer tomatoes and a beloved preparation in the south. 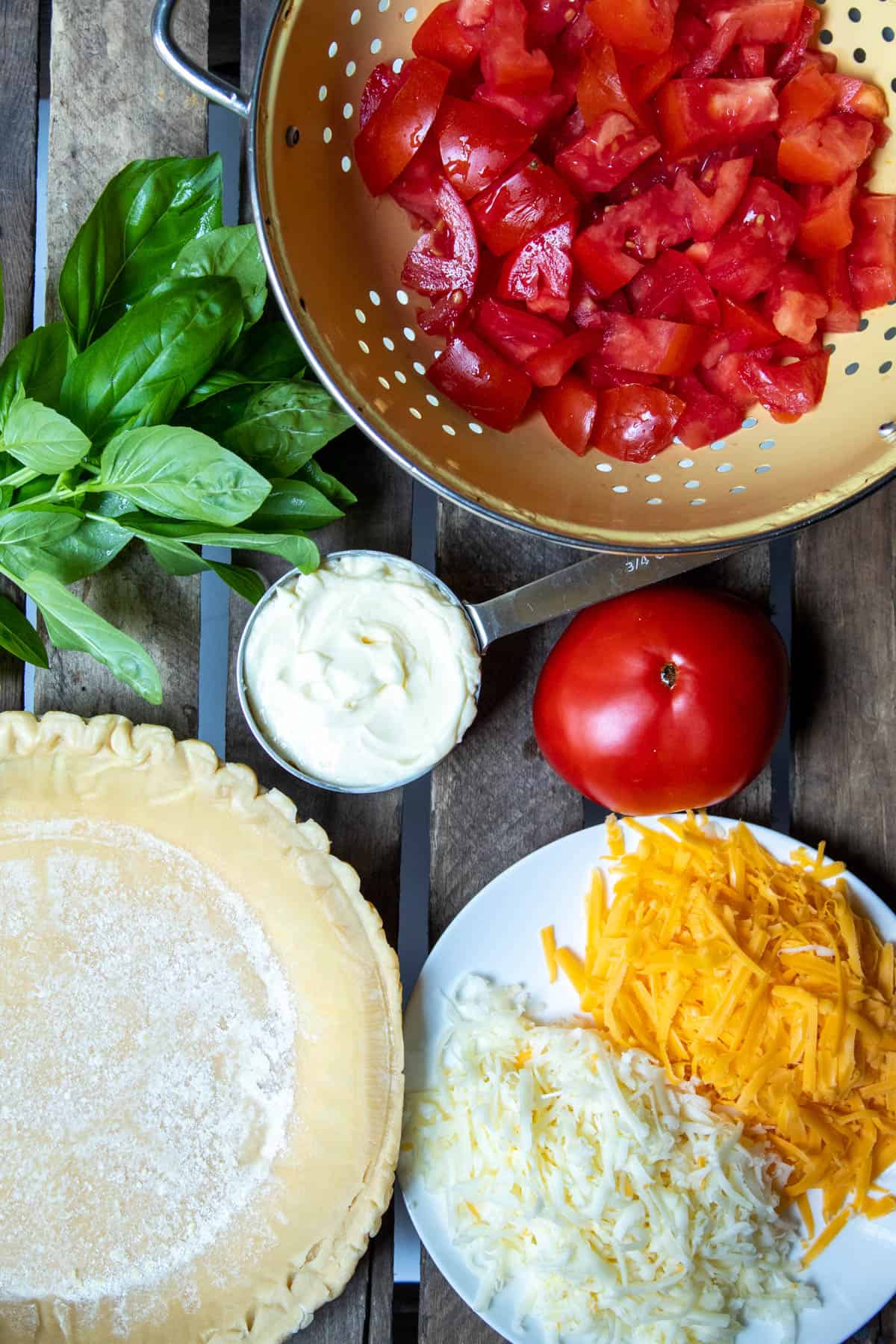 Here's what you'll need to make this old-fashioned tomato pie:

How to Make this Recipe 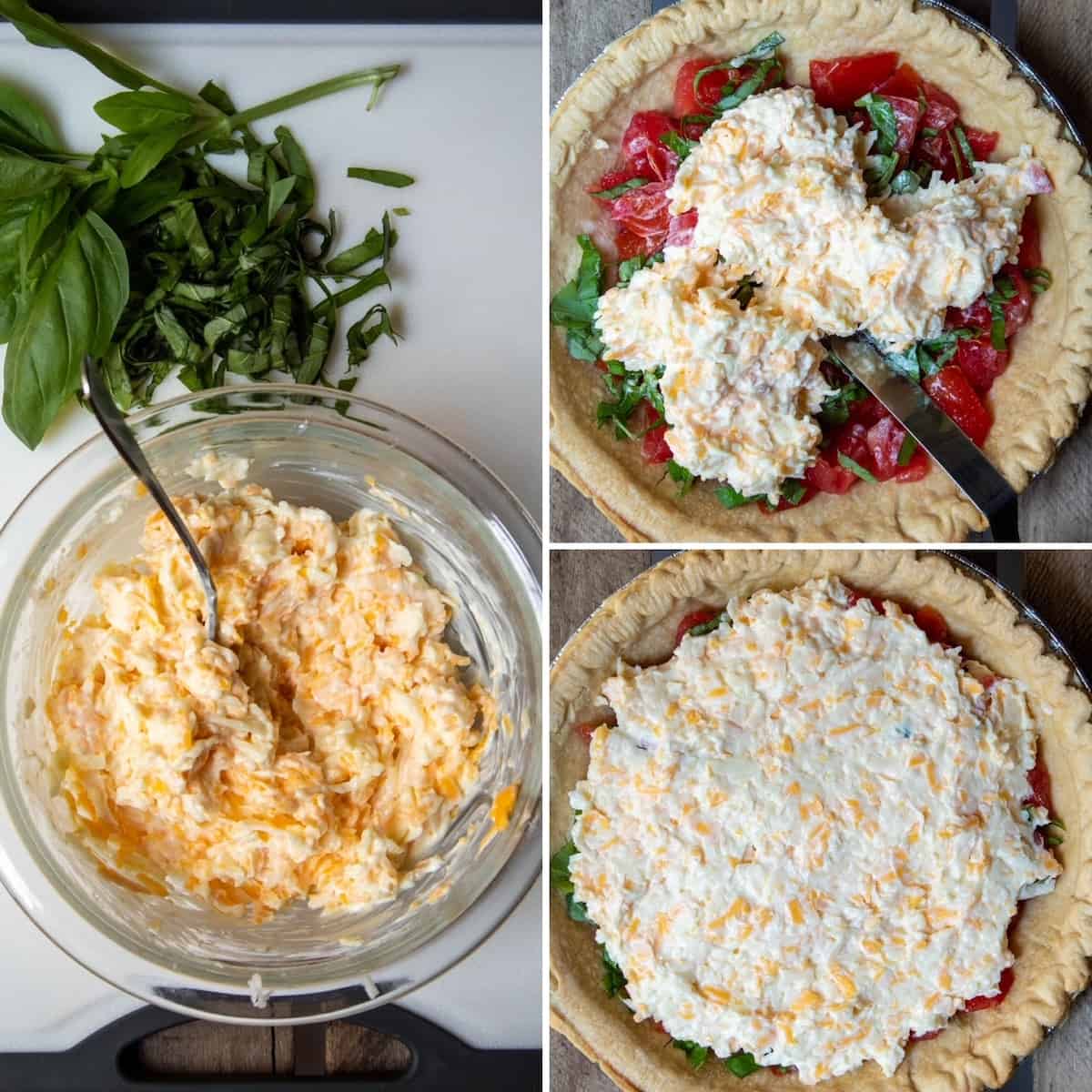 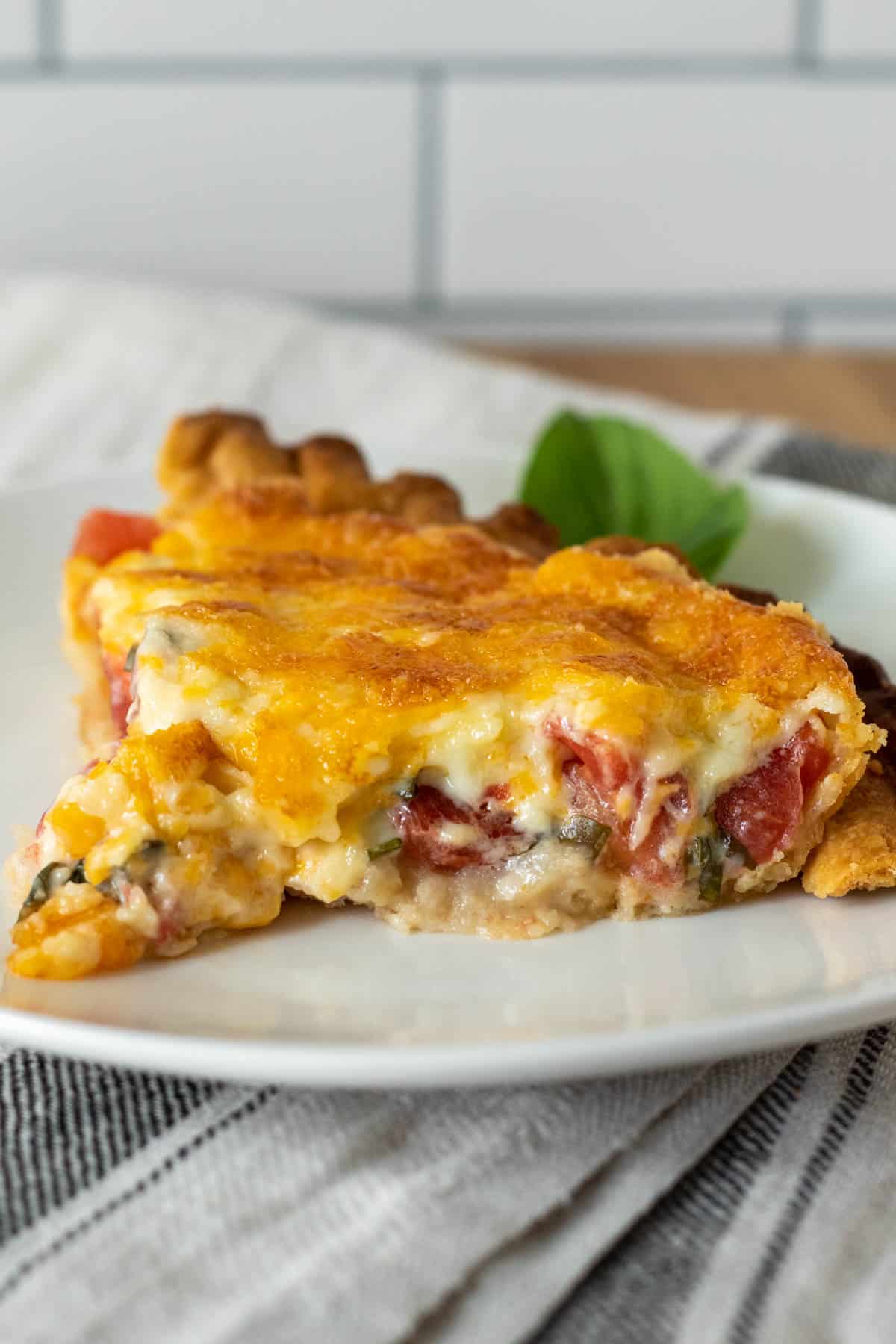 I'm so glad my mom passed this classic southern tomato pie recipe on to me. It made me think of my dad and Lynn, and all the good times they had gathered around good food and company. I was totally surprised by how tasty this summer savory pie is.

It's just perfect this time of year with all the late season tomatoes still coming in. For a light dinner with a green salad, for entertaining as a side dish or starter, for lunch... whenever! xxo- Kelly🍴🐦 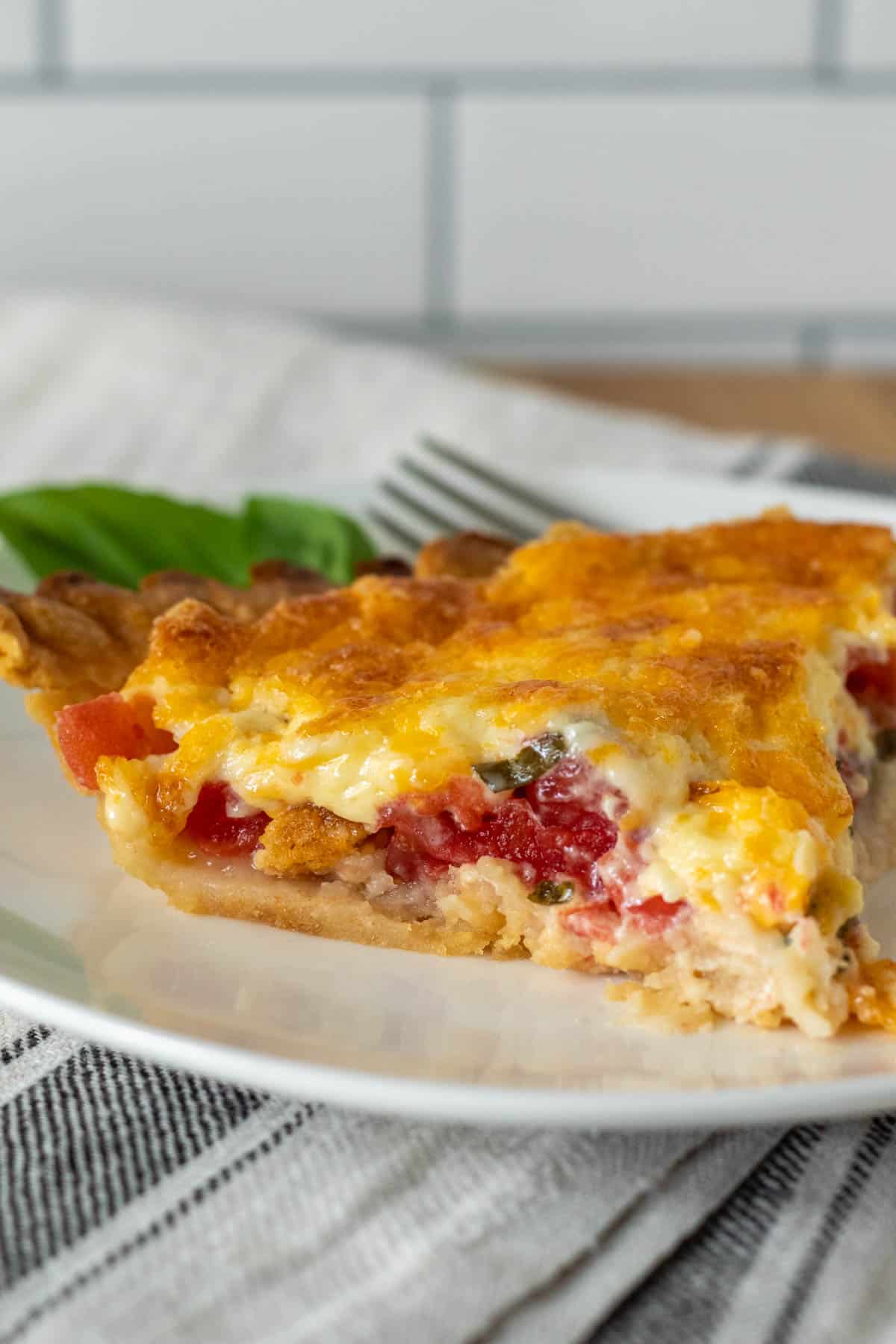 Another late summer recipe you might want to try is this Grilled Mexican Street Corn recipe, aka elote. It's perfect for sweet corn season and backyard barbecues. 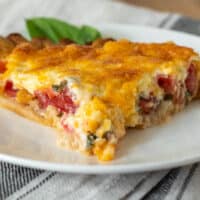 This is a great recipe! After I par-baked the crust, I added a layer of the cheese mixture to the crust then added tomatoes and topped with more cheese. No soggy crust!

@Cindy, that makes alot of sense! I will try it with that suggestion. THanks!

I apologize- my other comment posted before I could edit. I meant to ask if this freezes well? If so, would I bake before freezing or freeze it uncooked?

Would this freeze well? If so, would I bake them freeze, like freeze before baking? Seems a good way to use up garden tomatoes!

I use the same recipe and sometimes add caramelized onions to the layer.