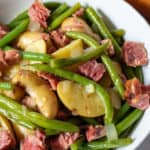 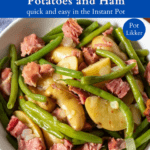 Country-style green beans in the pressure cooker with potatoes and smoky ham.  Slow cooked flavor in under an hour in the Instant Pot. These tender green beans, potatoes and ham in a wickedly delicious broth are to die for good and perfect for Sunday supper. 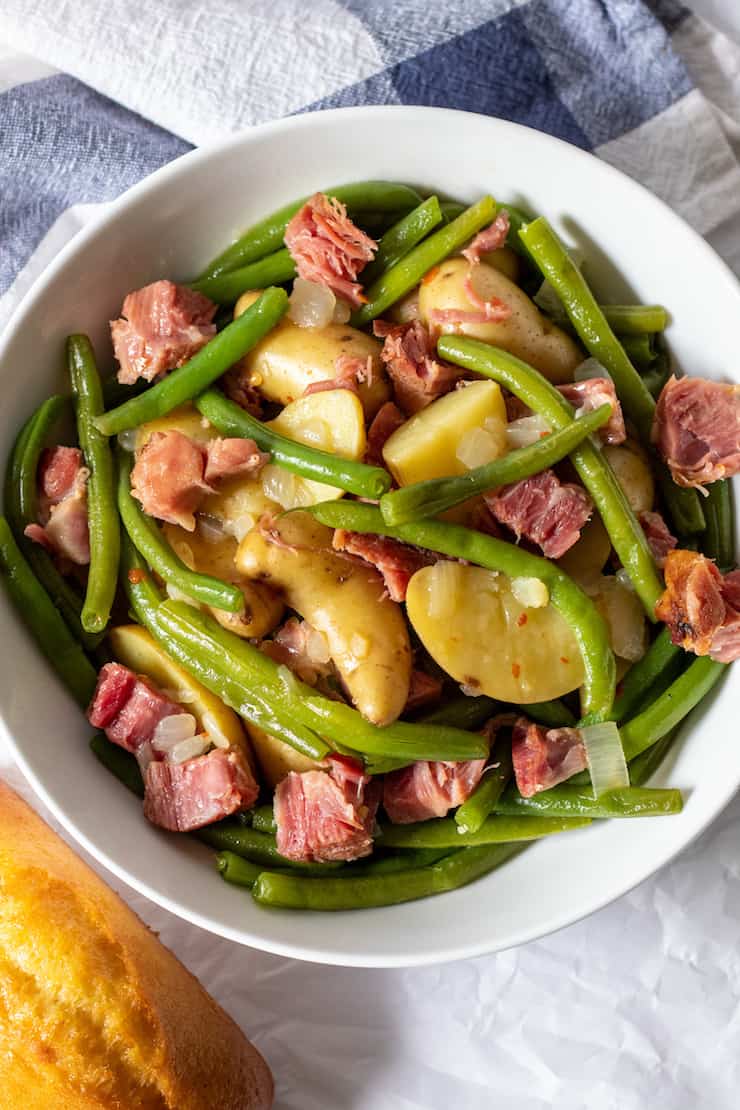 Boy, did August get away from me and the blog, but I'm back!  No excuses, just busy and enjoying those dog days of summer.  I started working the season at a local farm, just behind my neighborhood.  They are known for their tomatoes, but they also have a peach orchard, blackberries and right now, the apple orchard is open and busy.

The stand is stocked with our fruits and vegetables as well as other locally grown produce.  I have been inspired by the farm fresh produce and all the customers who share their favorite cooking tips and canning recipes.  This recipe for Country Green Beans, Potatoes and Ham in the Instant Pot was inspired from working the farm stand this summer. 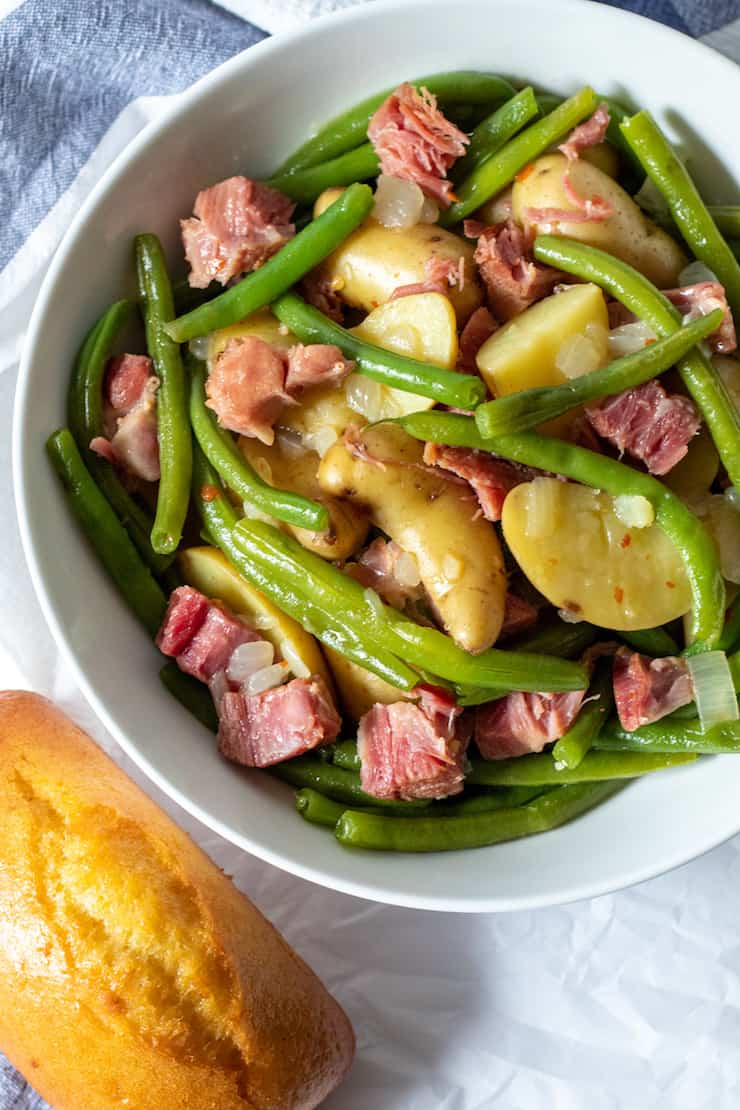 I started overhearing customers talking about making a pot of green beans and potatoes and asked how they were making it.  All the answers included green beans, potatoes and ham, in the crockpot or simmered for a long time on the stovetop. 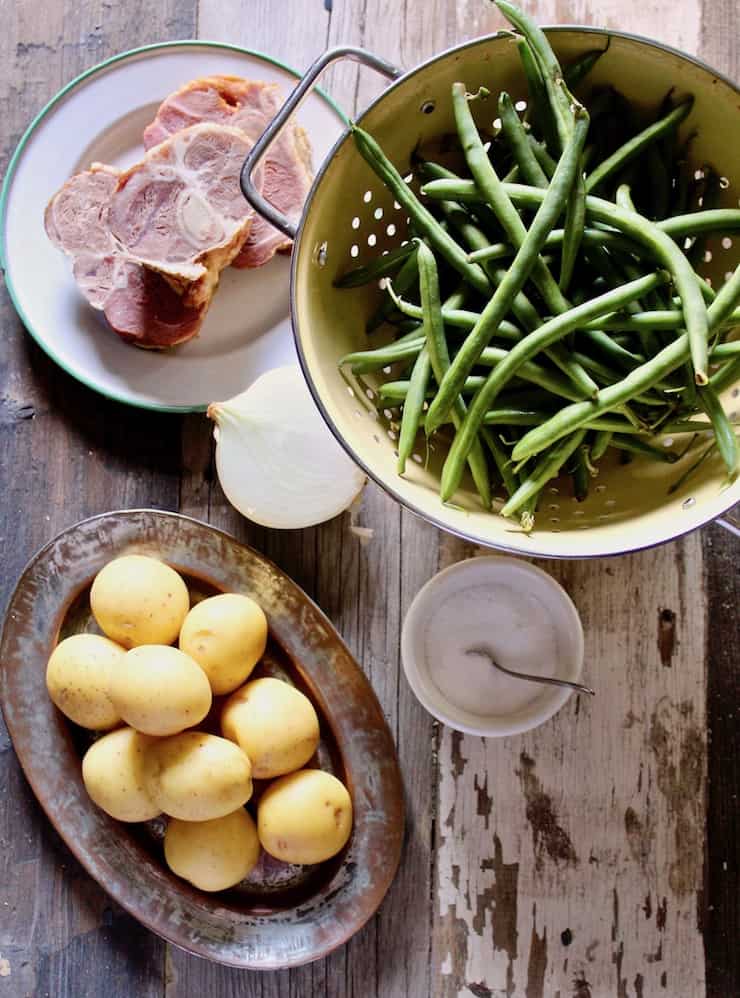 It took several tries to get these green beans just right, each time I played around a little with the seasonings and timing.  Each batch was delicious and was gobbled up, especially by Meathead.  I'm still learning how to pressure cook ~ researching and adjusting ~ biggest learning curve for me is the whole timing thing.  But I'm getting the hang of it. 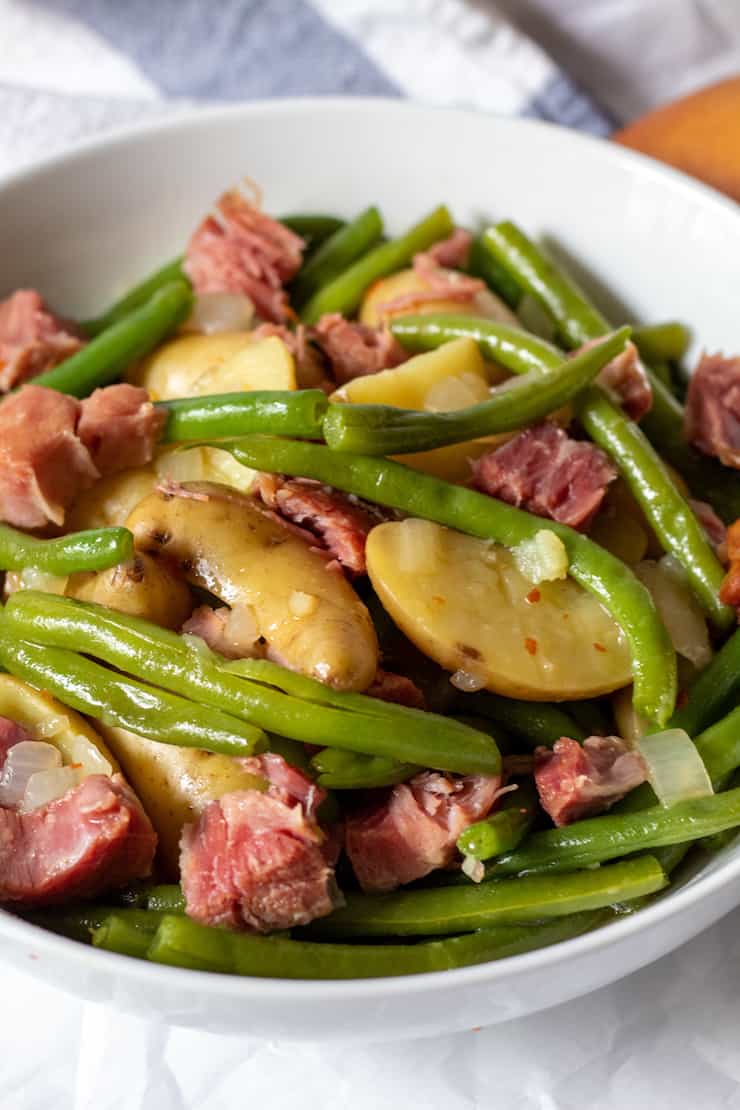 I used fresh, seasonal green beans and red potatoes from the farm, and chicken stock and seasonings.  And the most important part?  The ham!!  I use ham shanks to flavor the broth (or pot liquor) and green beans.  They have a nice smoky flavor and there is just enough meat to cut off the bone when done cooking.

That said, you could also use a ham hock (smokier and more fatty, less meat) or a meaty ham bone or piece of ham.  A lot of southern-style green bean recipes use bacon, which I'm sure is delicious, but I really like ham in this dish, both for flavor and the meaty pieces. 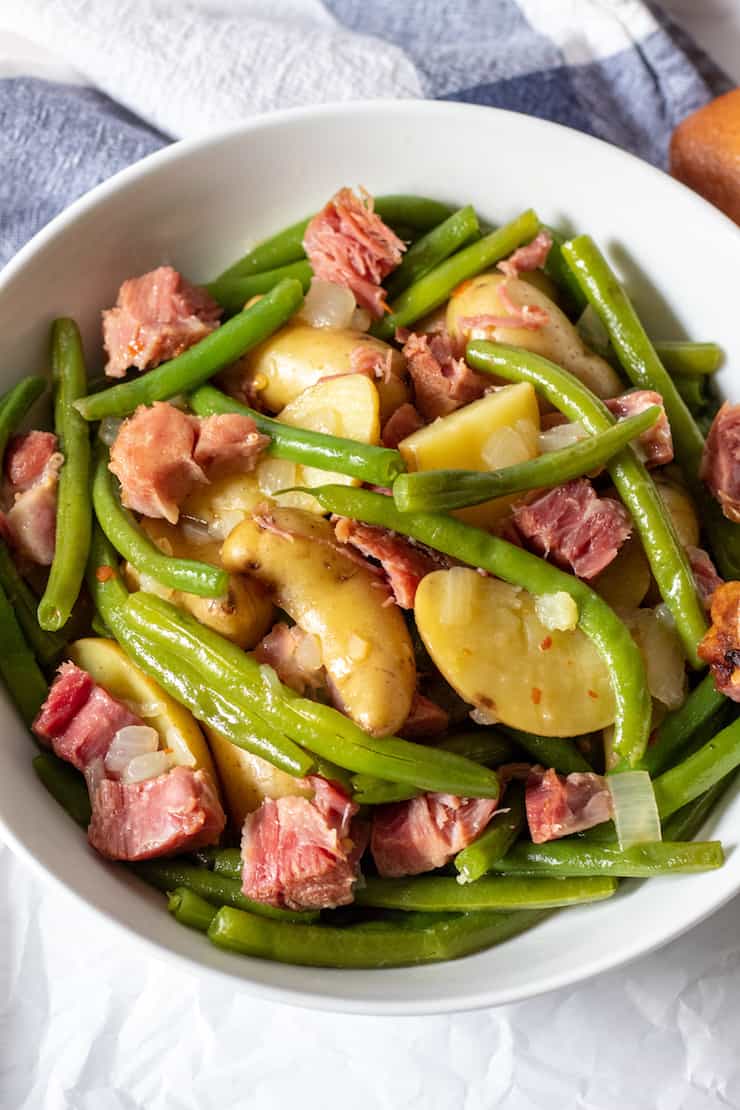 I have been making these country-style green beans almost weekly for the past month, usually for Sunday supper.  No complaints from Meathead, in fact he's starting to expect a big bowl of country green beans every weekend, with cornbread to soak up all the 'pot likker'.  It's pretty easy to make him happy with this one, it's a keeper ~ Kelly🍴🐦 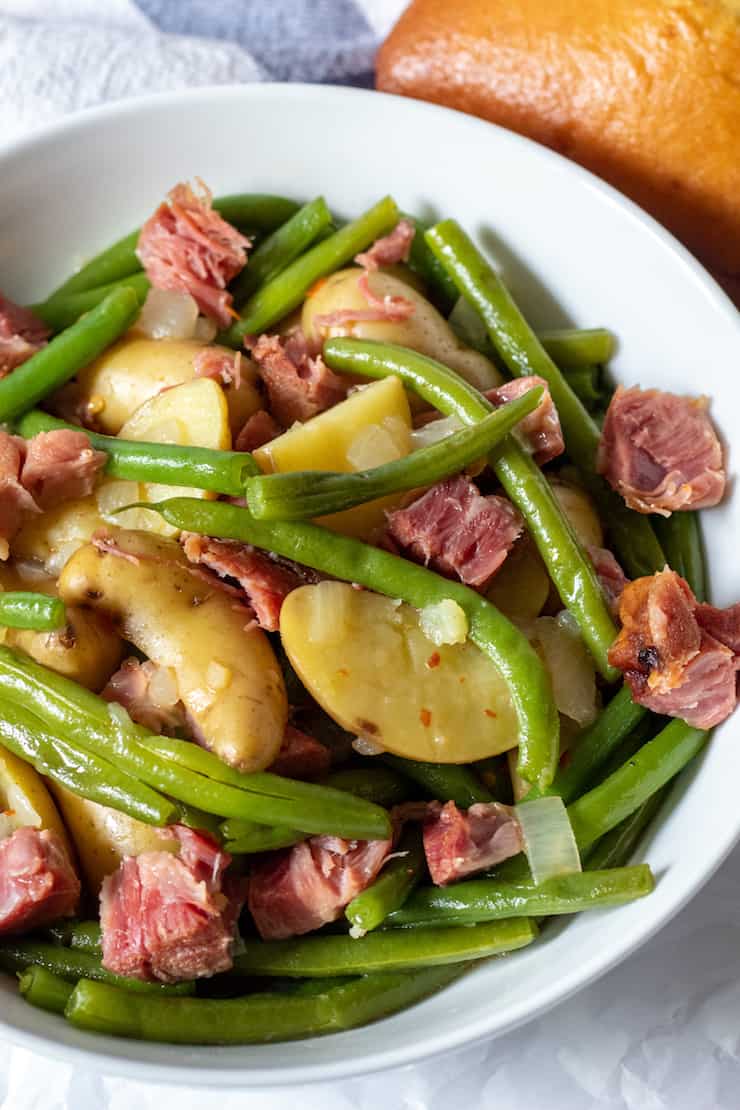 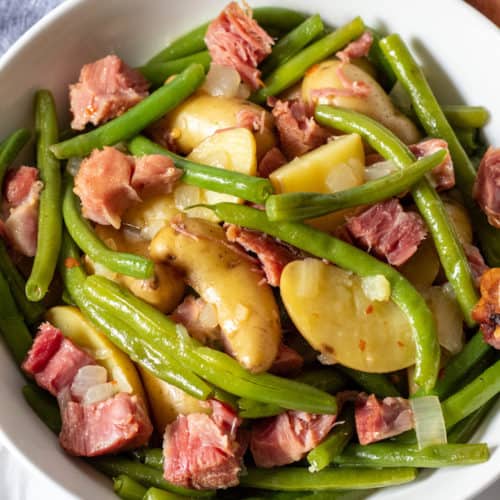 Country Green Beans, Potatoes and Ham in the Instant Pot

Goes great with corn bread! I love this recipe, comes out perfect every time!

This was a great recipe. Made it for my grandson and his girl when the visited. loved it, I have been cooking over 60 yrs and this was so easy in the instant pot I will make it again.

Glad to hear this Beatrice. I love this recipe, too!

Great recipe! I made the following changes to use what I had on hand: used an end piece (with bone) of a spiral-sliced ham, frozen green beans (placed in pot while still frozen), and about one pound of small fingerling potatoes (cut the potatoes in half). Used one tsp Better than Bouillon ham base dissolved in 12 oz of water. Omitted any additional salt and seasoning salt as ham and base are salty enough for us. Also omitted butter. 5 minutes on high pressure, then natural release for 10 minutes, then manual release. Really good end result. Thanks for a great recipe.

I'm still learning how to effectively use the Instant Pot and this recipe is a keeper! I doubled the amount of stock and the seasonings because I like a lot of pot liquor to dip cornbread into. The flavor was just perfect and the technique was easy to follow and produced great results! Thanks for sharing, Kelly.

You are so welcome, Anita! So glad you liked it.

It was amazing and so simple!

I'm glad you liked it, Saren!