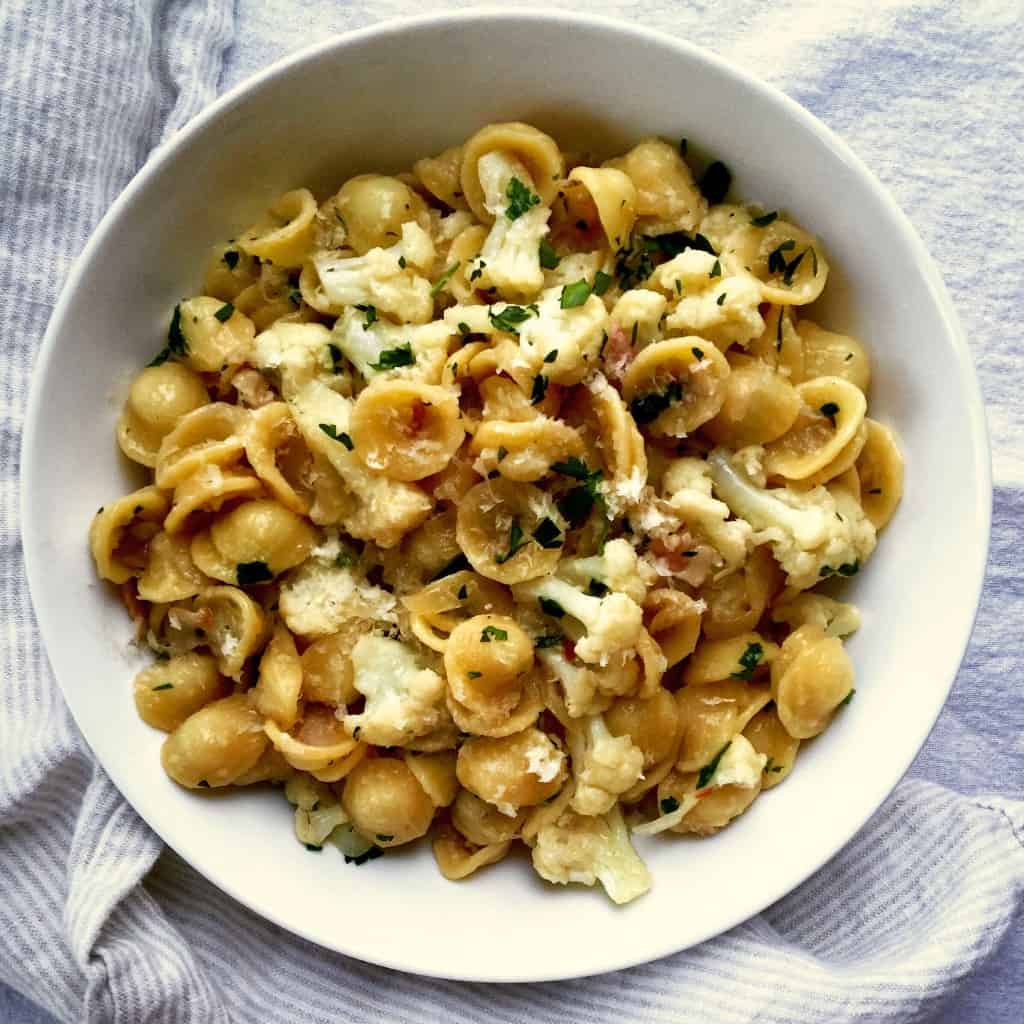 Have you noticed how cauliflower is kind of hot right now?  I have, and I admit I almost never make it.  I tend to conjure up the image of a bad veggie tray with bad ranch dressing when I think of cauliflower.  But then, I remembered making this pasta dish a few times, and it's delicious and has cauliflower in it.  It's from Lidia Bastianich's cookbook that my family gave me for Christmas one year.  It's rustic, humble and just a beautiful pasta dish.  Orecchiette with Pancetta, Cauliflower and Bread Crumbs.  I love it. 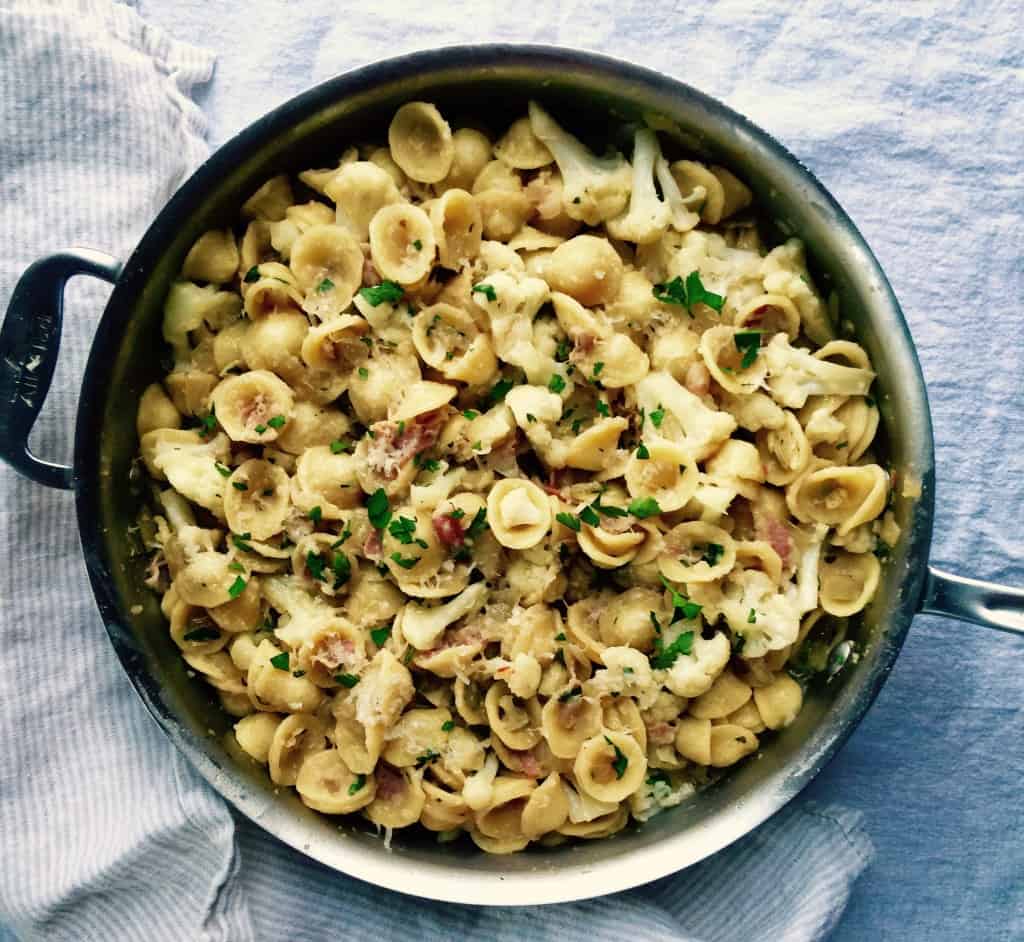 If my memory serves me right, I think I saw her make this on a PBS cooking show.  She referred to it as a peasant dish, I believe.  Instead of using grated cheese, it calls for fine bread crumbs to thicken the sauce, which would have been a frugal choice over expensive cheese.  I used panko and then sprinkled some grated Parmesan on top of the finished dish. 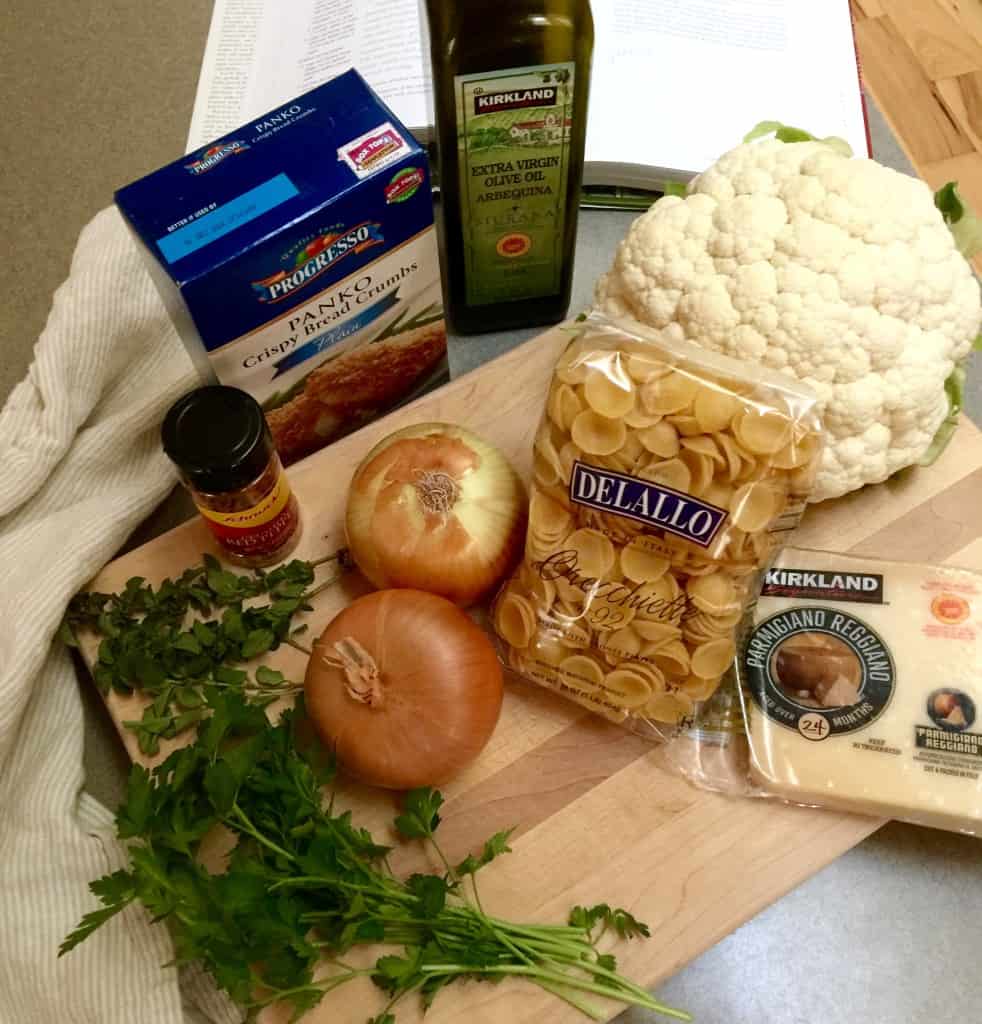 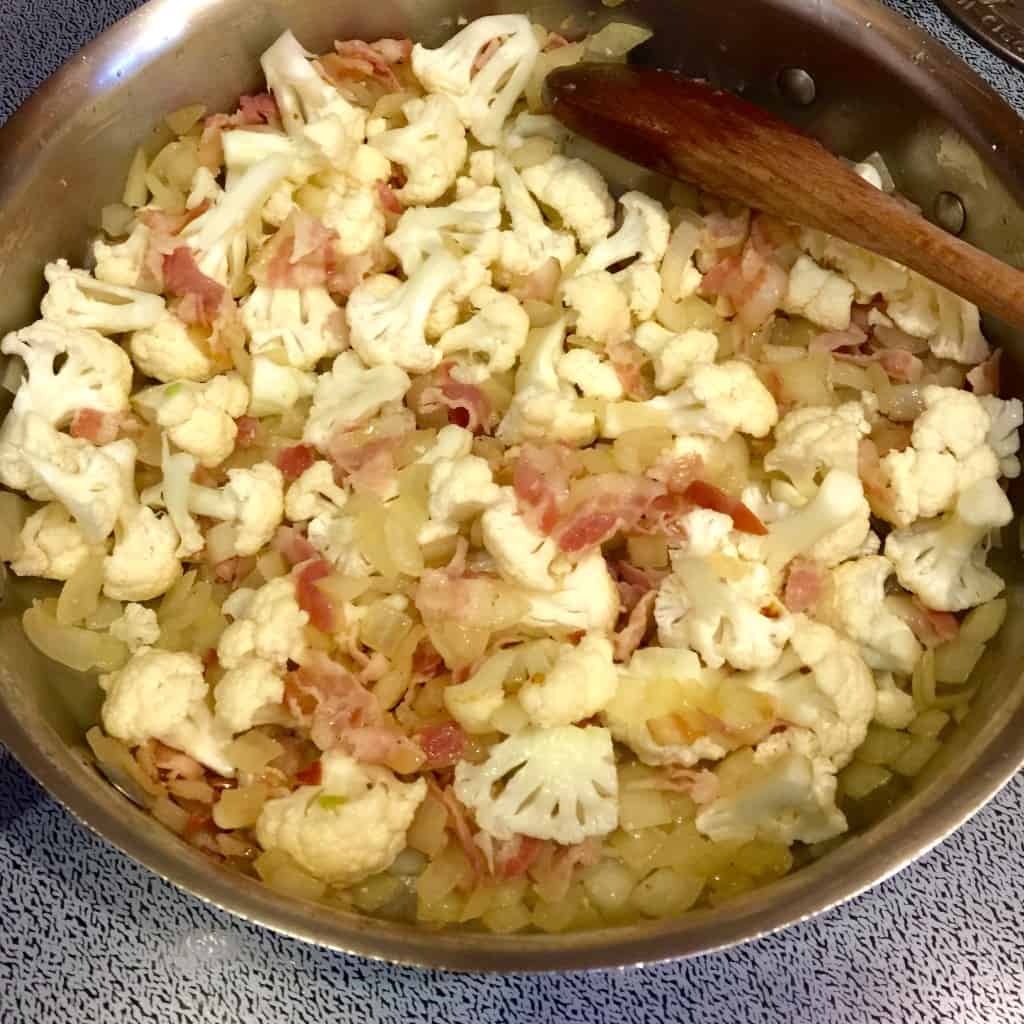 This pasta dish has few ingredients so quality really matters.  Use a good olive oil, homemade chicken stock, a good dried pasta, uncured Italian pancetta and, of coarse, a fresh cauliflower that's free of blemishes.  I started with the amounts called for in the recipe and then adjusted as needed, mine needing more chicken stock.  I also had some fresh oregano, so I added that.  It's fine without it, so no worries if you don't have fresh oregano. 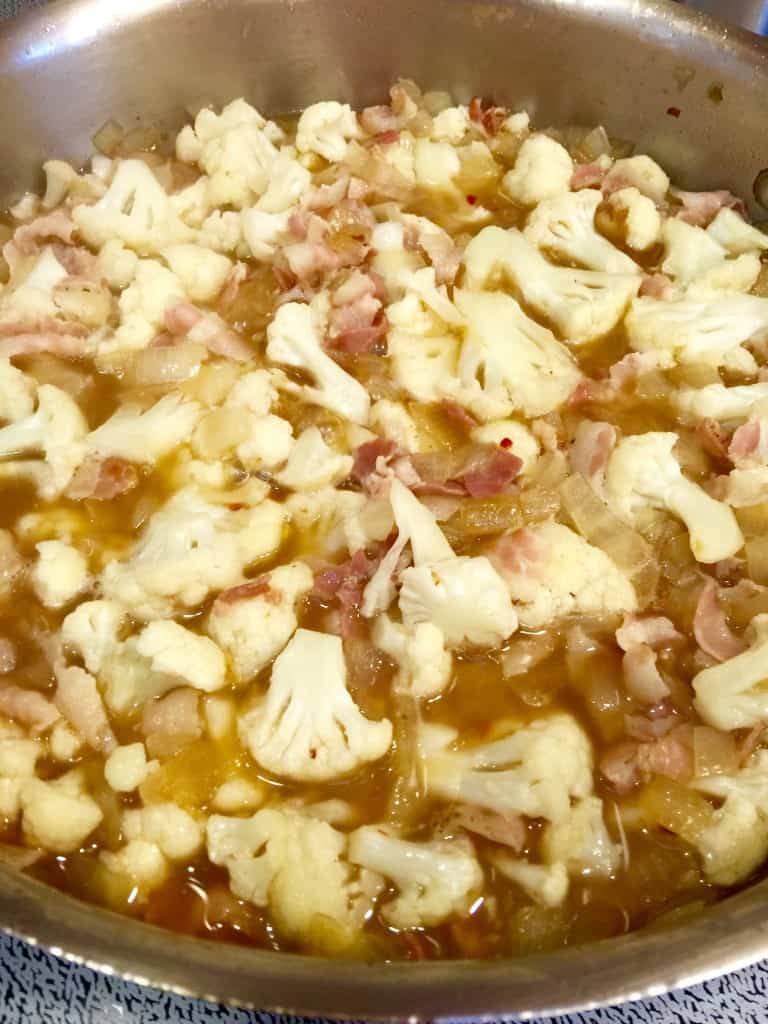 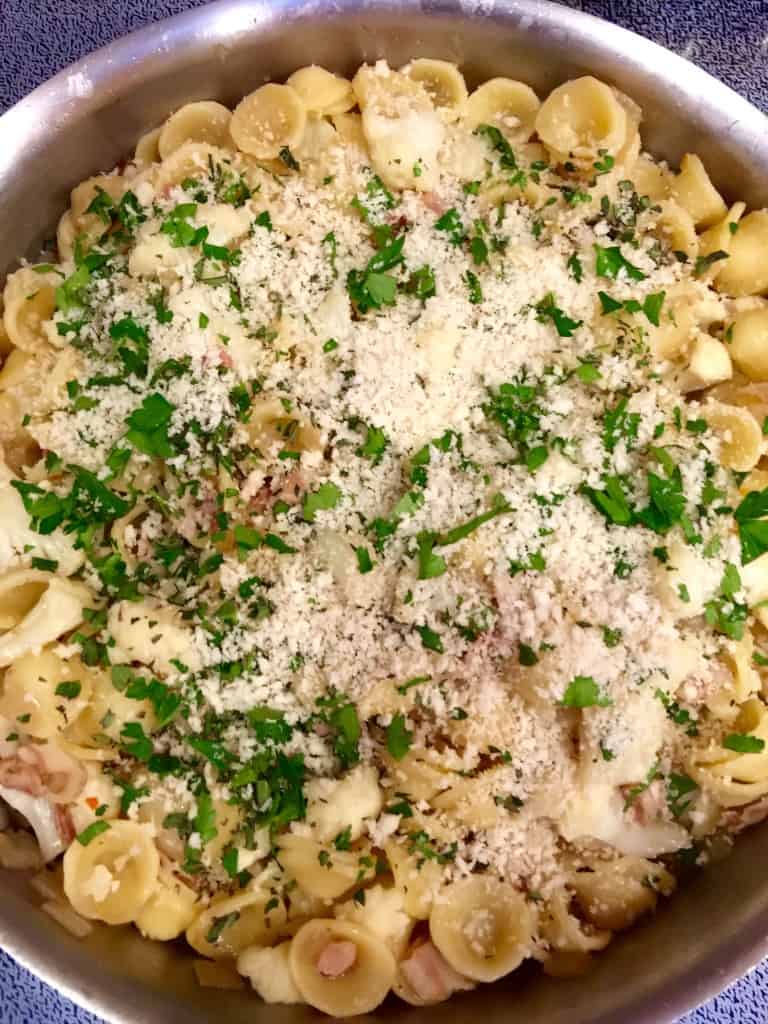 I had half a head of cauliflower left over.  Last night, we sliced it up, tossed it on a sheet pan and drizzled some olive oil all over with sea salt and fresh cracked pepper, some crushed red pepper and a hit of curry powder.  We roasted it in the oven until tender, and man, crazy good stuff.  I am definitely on the cauliflower bandwagon.  Try this pasta, you'll love it, and you definitely won't be thinking of the lowly veggie tray. 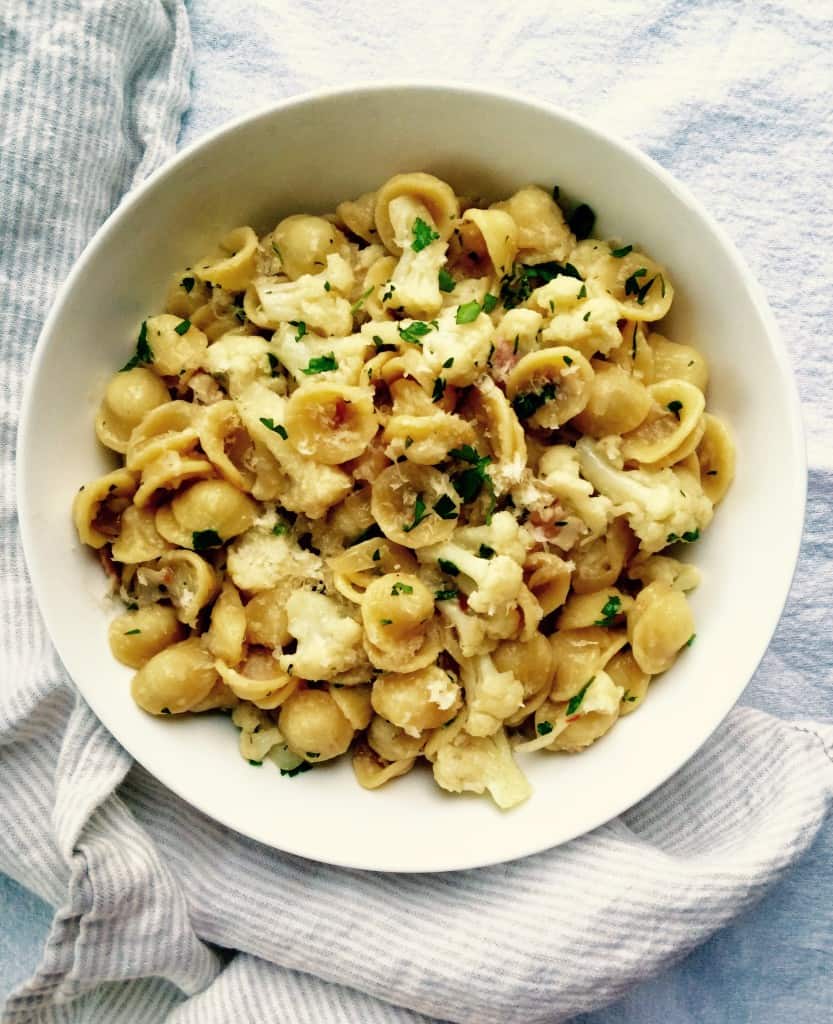 This was fantastic! Substituted bacon for pancetta because that was what I had on hand. Will make this again!

Geez-Kelly kept us well fed this weekend! I made this last night, and Steve and I LOVED it. Cole ate a huge plate of the leftovers when he got home late last night, and took the rest for work tonight. We've joined you Mark, on the cauliflower bandwagon!

Jump on the cauliflower bandwagon!