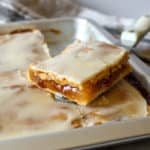 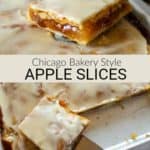 Chicago-style bakery apple slices.  Apple filling between two crusts in a sheet pan, topped with vanilla glaze and cut into squares. These slices are very portable and travel well for your potluck or next get-together! 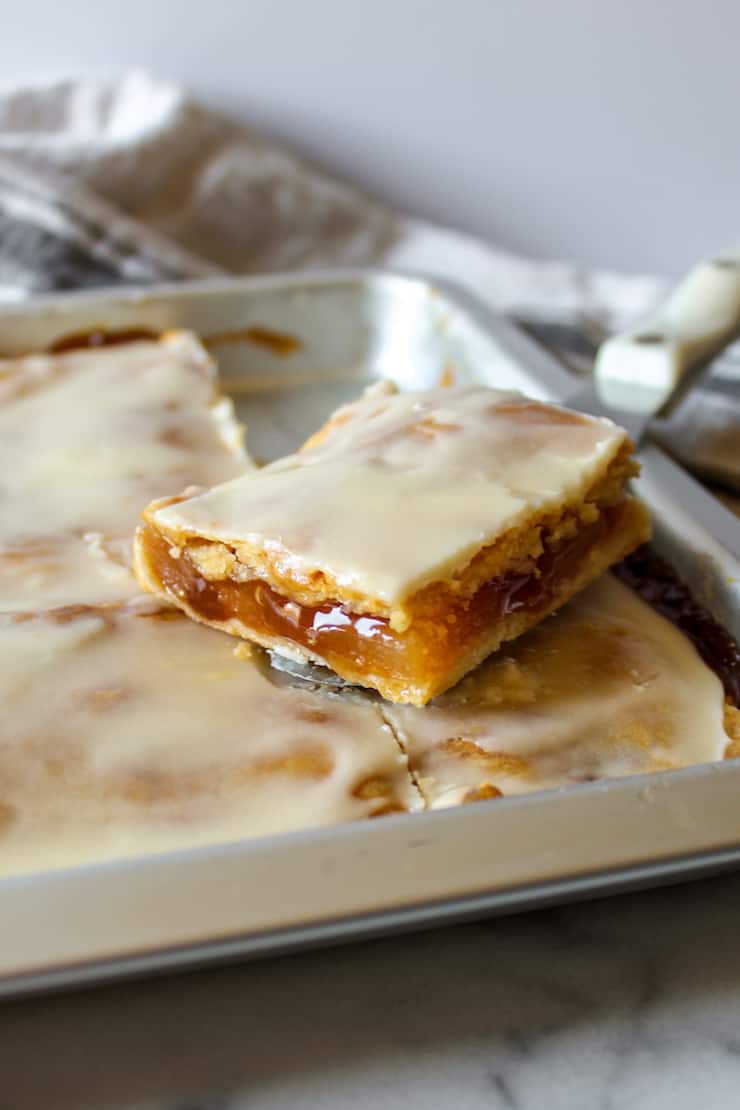 I grew up in the Chicago suburbs and as an adult I lived in the city.  I love Chicago neighborhood bakeries.  I have my favorite back home that I still stop in for something sweet when I visit my mom.  And I had my favorites in the city, mostly on the north side. 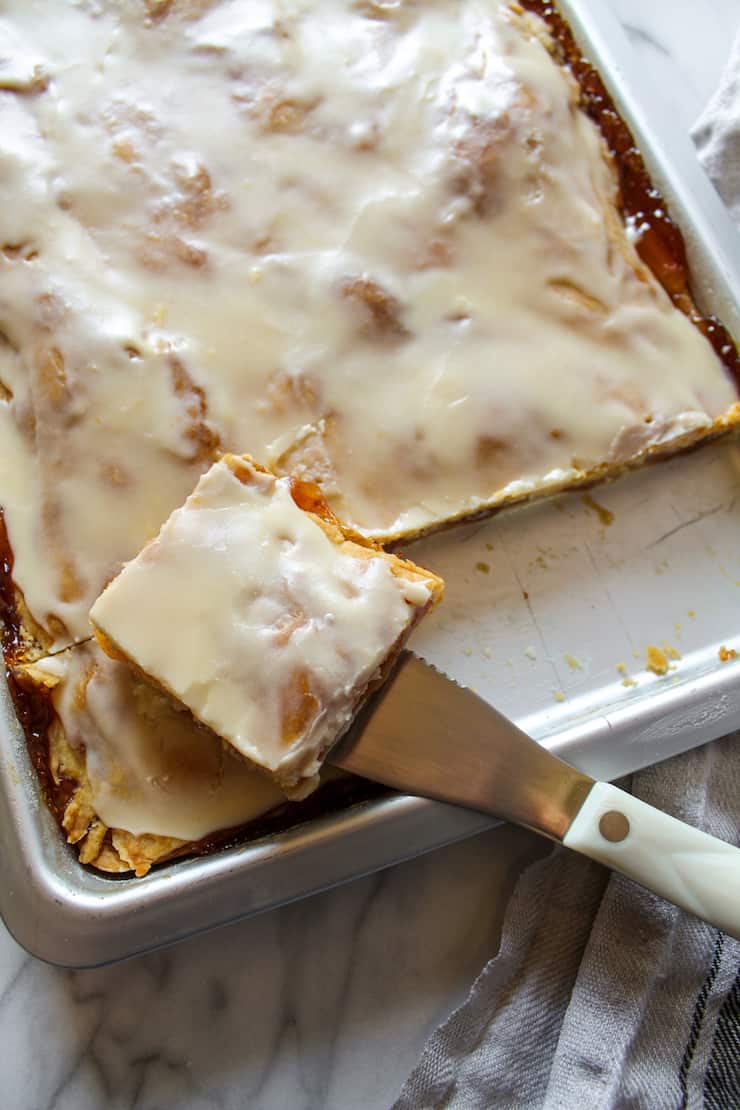 One thing these bakeries had in common were big sheet pans of apple slices in their cases or sitting out on the counter.  Often times, they were next to a big sheet pan of frosted fudge brownies, which I’m also crazy about.  The bakery always had Apple Slices and I loved them. 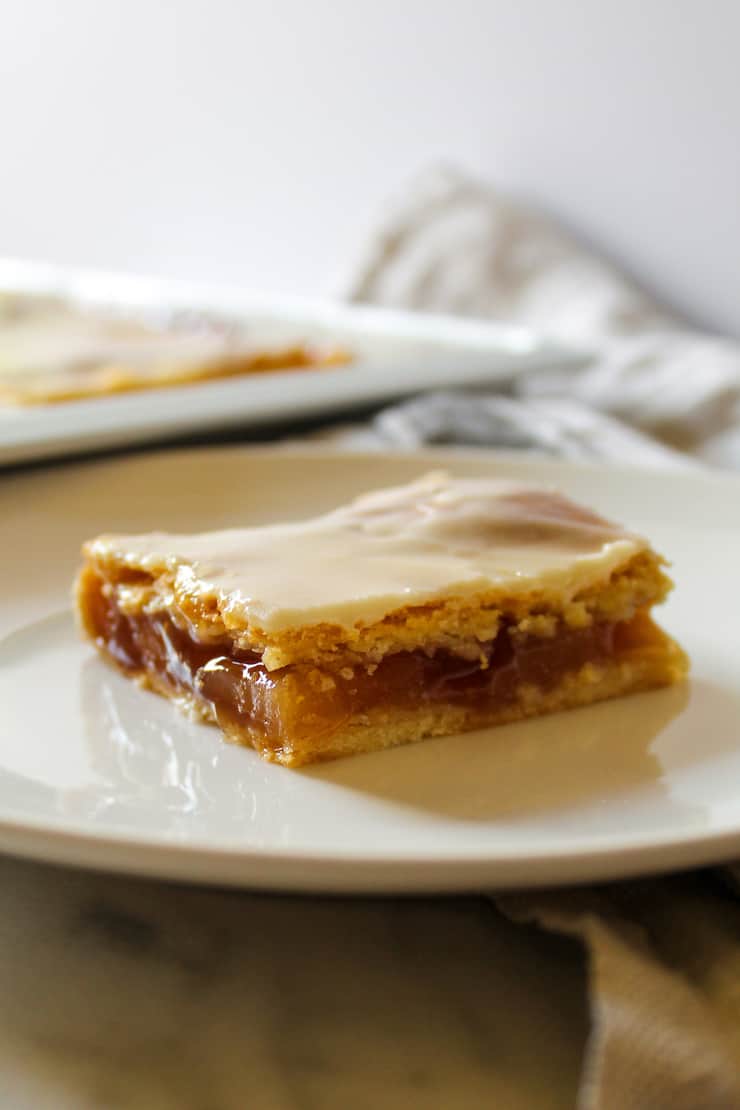 How can I describe them?  Not apple pie, not a bar, and not slab pie either.  Apple filling between two crusts with a thin glaze on top, and they are cut into squares like brownies.  That’s my best description and if you’ve seen or had these apple slices, you know exactly what I’m talking about.

Okay, let’s talk my baking skills.  Not the best and I debated about this post since my top crust was rather pathetic-looking.  But it tasted perfect, the glaze camouflaged any imperfections ~ so no worries for me.  Besides, there’s no way my sheet pan of apple slices would look like it was from the bakery.  But close, damn close. 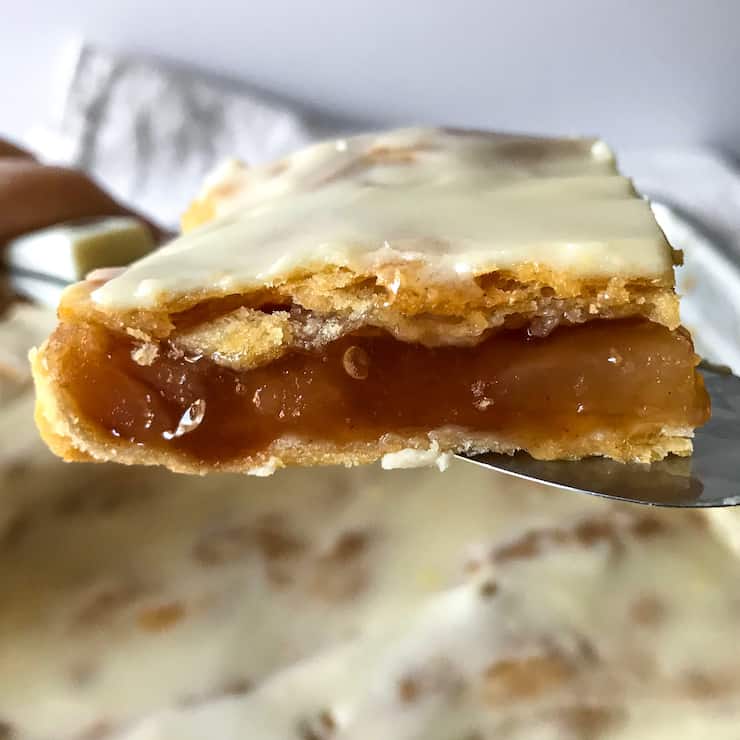 I found a few recipes for these Chicago-style bakery apple slices that were pretty much the same, apparently adapted from a 1972 edition of the Chicago Tribune.  That would be the source I wanted and the recipe I chose to adapt. 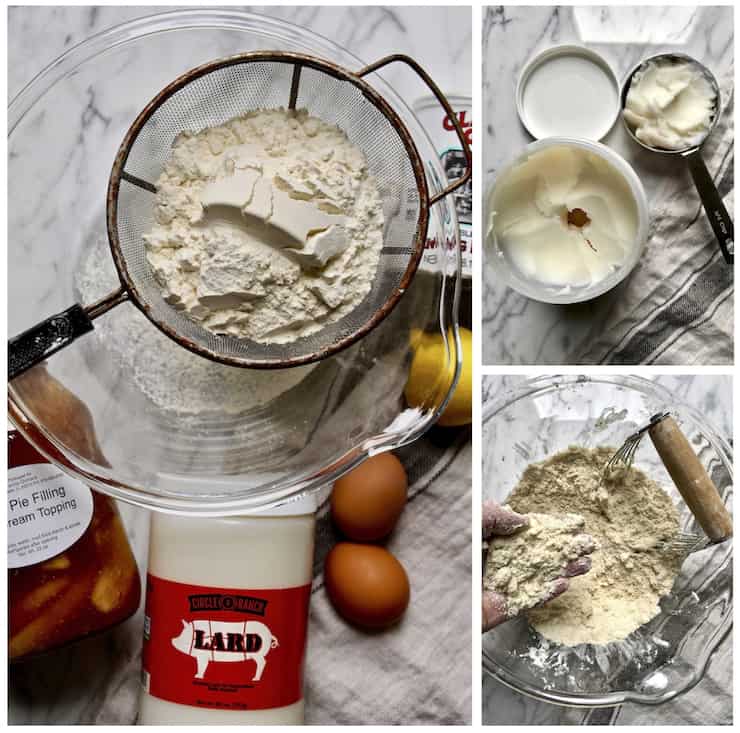 I use lard for all my pie crusts and I highly recommend it.  This recipe called for lard, no butter.  Try and find a non-hydrogenated, unprocessed lard ~ that’s the best to use.  The other hydrogenated stuff isn’t so good, just sayin’. 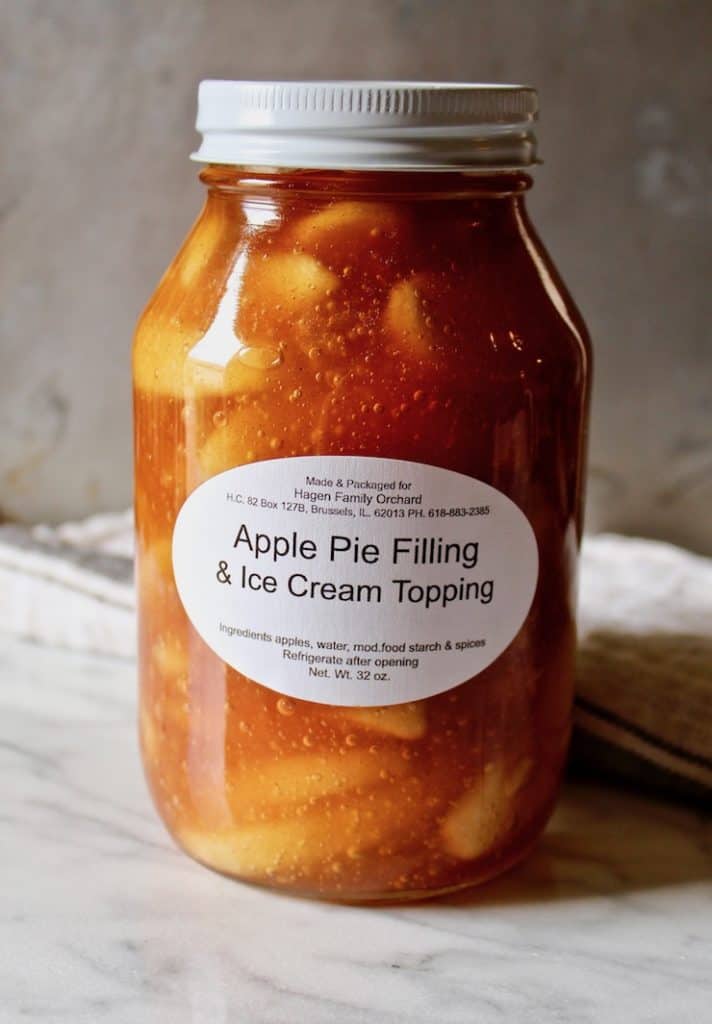 I used a quart jar of Amish apple dessert filling I had in the pantry.  It was perfect for these apple slices.  Use any pie filling you prefer, and I’ll also put the apple filling directions from the recipe I used in the recipe notes, in case you want to make your own filling.  And I used a smaller jelly roll pan, not a full or even half sheet size.  You could double the recipe for a larger sheet pan. 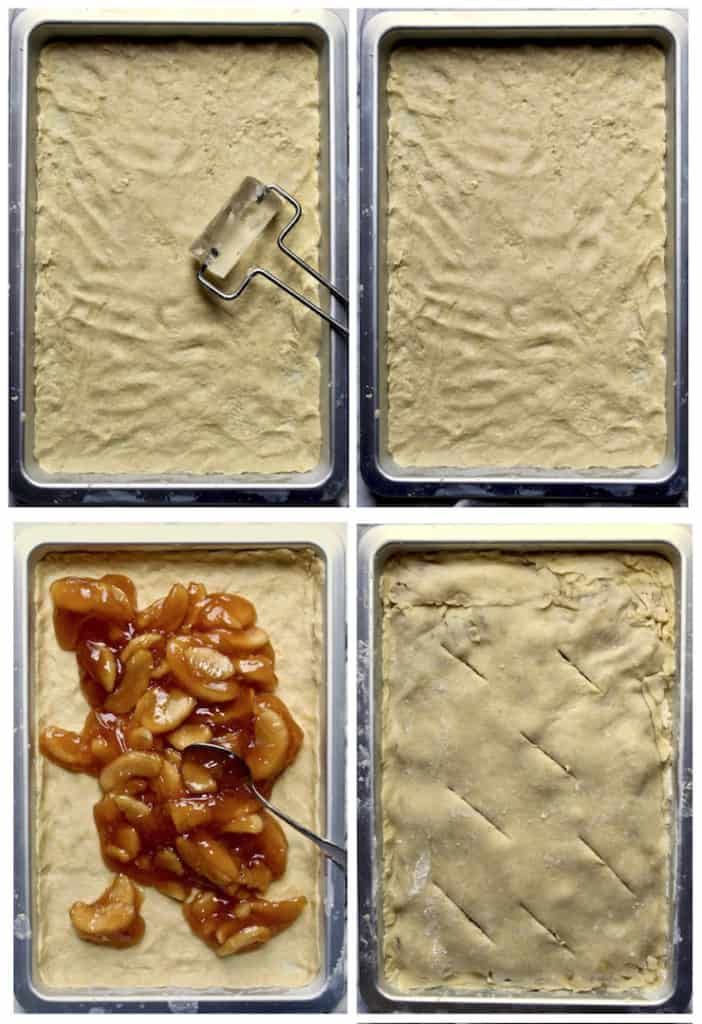 The dough is a bit hard to work with, at least I thought so.  I pressed the dough in the bottom of the pan with my fingers.  I rolled the top sheet of dough on the back of a well-floured sheet pan and then transferred it.  It still tore in the corners and my attempts to patch it were comical.

This isn’t like working with a traditional pie dough.  But I don’t think it matters, it tasted great, was brown and crispy, and the vanilla-butter glaze on top covers any glaring goofs.  Just patch the dough the best you can. 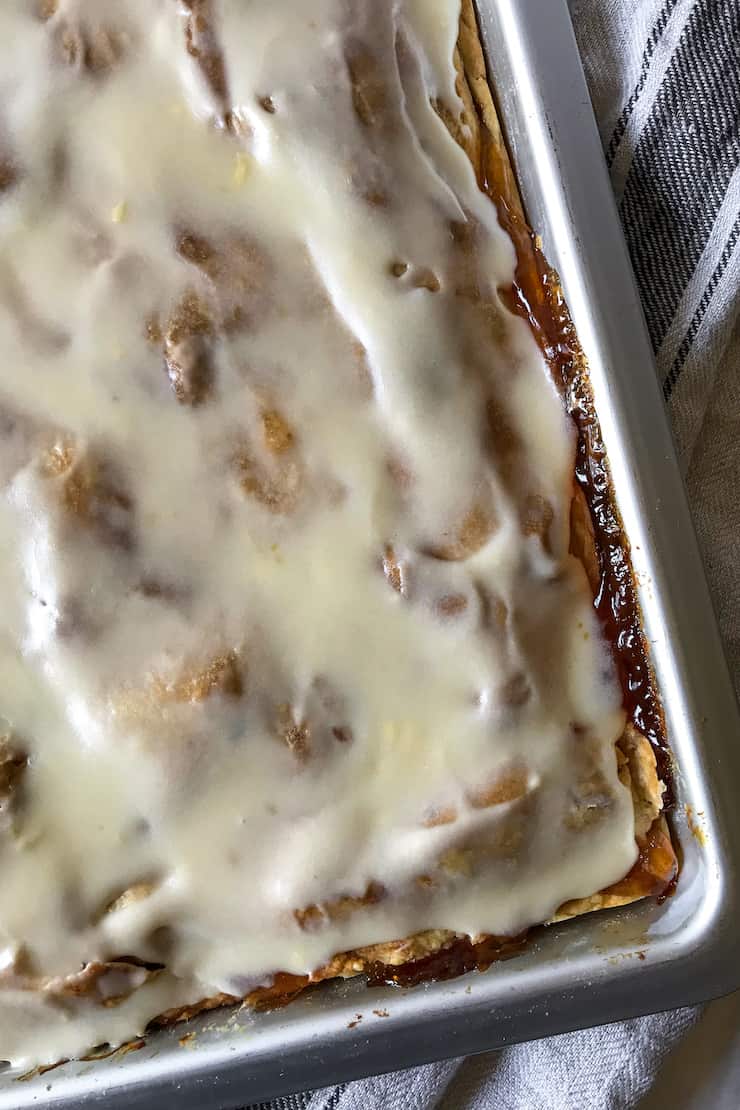 I used to get an apple slice for the car ride home from the bakery, they’re very portable.  I’d gobble it up right out of the bag, holding it with the little piece of white bakery tissue.  So, off you go!  Make these Apple Slices and you’ll have this iconic Chicago-style bakery treat at home.  They disappear fast! ~ Kelly 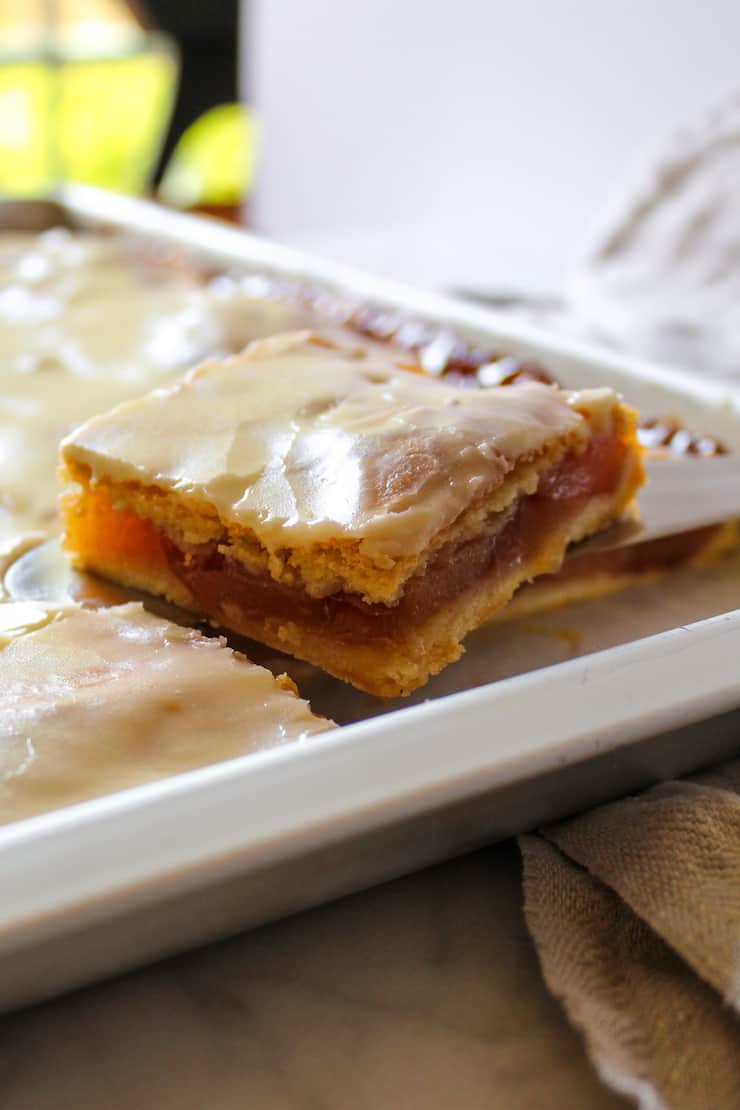 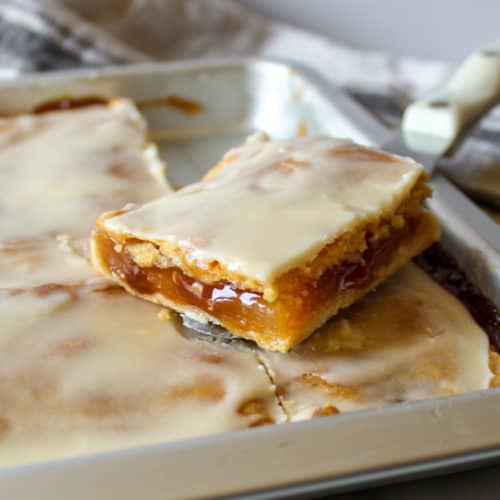 I was so happy to find this recipe! My grandma often made apple squares for holidays. She lived in a suburb of Chicago. I didn't know that apple squares were a Chicago thing. I have made this recipe several times. it's a great dessert! Thank you for sharing this recipe!

I accidentally put the whole 2 eggs in the dough. How will this affect the dough or do I need to start over? Goofy mistake! It’s being refrigerated. Thanks!

Hi Beth. I don't know how that will affect the dough, hopefully you didn't start over and it worked out just fine anyway. I think it affects the texture and richness a bit but won't necessarily ruin the recipe.

Excited to try your recipe. I have a lot of apples off a tree where we camp. My pan is 12 x18, so I'll double your recipe.

I am from Chicago and have looked for this recipe for years...thank you! I only have a 10x15 jelly roll pan, not 9x13. Can I use that one?

That size should work, hope you try and like these apple slices!

I made the for a charity picnic. Everyone wanted the recipe. I used fresh apples that I par-cooked with stevia cinnamon, nutmeg, and cornstarch. It was fabulous. Thank you for the recipe.